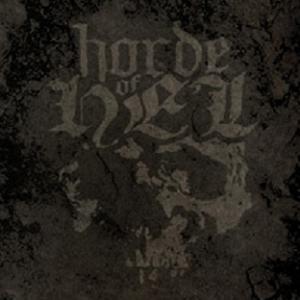 Horde Of Hel are a band from Sweden that plays a very original fateful/evil form of black metal and this is a review of their 2009 album released on American label Moribund Records "Bloodskam".

Drums are slow at a lot of times on this with some fast and brutal blast beats, while the bass playing is very dark and rhythmic sounding which makes the music sound really evil, as for the keyboards when they are used sound very slow and atmospheric with an industrial/noise edge which uses samples as well.

Rhythm guitars on this album use a mixture of some slow, mid paced to fast riffs that use some palm muting and they never get one dimensional sounding, with not many guitar leads being utilized accept on some songs and they contain a lot of melody as well as distortion.

Vocals are mostly high pitched black metal screams with some occasional clean singing and some growls mixed in with some unholy choir singing that has an avant classical and medieval feel, while the lyrics cover a lot of anti christian themes with  a lot of hate as well as violence, as for the production on this recording which was recorded in the year of the lord and mastered by Devo of Marduk fame at Endarker Studio, sounds very raw but at the same time professional and all of the instruments sound very good on this album. Mortuus Of Marduk and Funeral Mist also designed the cover on this masterpiece.

In my opinion this is a really good album and this album is very original and cannot be compared to any other band or be accused of copying or plagiarizing anybody. If you are a fan of black metal that does something new without being commercial or selling out I would advise you to pick up this masterpiece.

STANDOUT TRACKS INCLUDE "HAIL CHAOS""Legacy Of Vengeance" and "Unborn". A RECOMMENDED BUY