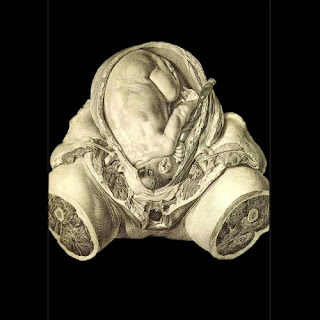 Orcustus are a band from Norway that consists of band members that have played in Gorgoroth, Enslaved, and Gehenna that plays a raw form of Satanic Norwegian black metal and this is a review of their 2009 self titled album which was released by Southern Lord Records.

Drums are mostly fast with a lot of blast beats being utilized, while the bass playing is really fast and primal which follows the riffs coming out of the guitars.

Rhythm guitars are very fast morbid and raw sounding fast black metal riffs with some mid paced riffing and some parts that are very thrash influenced and there are no lead guitars or solos on this album.

Vocals are all high pitched black metal screams with some deep growls on one song, while the lyrics are about hatred for the world with an Anti Christian as well as a theistic form of Satanism message being presented and there are some spoken word samples used on a few songs, as for the production which was recorded and produced at Misantrof Studios with the vocals being recorded at Slimecave Studios during the years of 2007 and 2008 sound very professional but retains the raw black metal feel.

In my opinion this is a very good album and while it is not very original it is still very heavy, raw and well played by a bunch of veterans that have been apart of the black metal scene for almost 20 years, if you are a fan of raw Satanic Anti Christian Norwegian black metal you will not be disappointed.

Posted by OccultBlackMetal at 7:24 PM