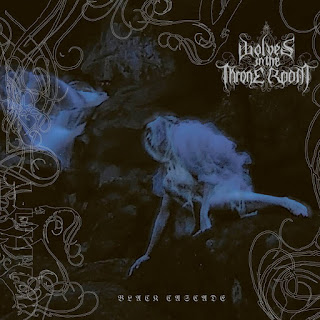 Wolves In The Throne Room are a band from Olympia, Washington that plays a brand of eco-fascist black metal with some ambient influences and this is a review of their 2009 album "Black Cascade" which was released by Southern Lord Records during the year of 2009.

Drums are mostly fast with alot of fast blast beats and some ocassional slow parts while the synths when they are utilized give the music a very dark ambient feel, as for the bass playing it follows the riffs coming out of the guitars and is all rythym bass.

Rythym guitars use alot of variety with some slow atmospheric riffs that have some doom metal influences that are very depressing sounding mixed with alot of fast primal black metal riffing while the lead guitars when they are used are very melodic and there is not much in the way of guitar solos, acoustic guitars when they are used use alot of full chords and give the music a very dark and depressive atmosphere.

Vocals are mostly high pitched black metal screams, while the lyrics touch on the teachings of Rudolf Steiner and one of the songs is based on his novel "Lucifer And Ahriman" mixed with some nature orientated shamanism/occultism that carries an extreme left wing message. as for the production of the album which was recorded at London Bridge Studio during November of 2008 with some additional recording at Aleph Studios sounds professional but still raw in a raw black metal way.

In my opinion this is a really good album and prove's why Wolves In THe Throne Room are one of the leading bands in the United States Black Metal, if you are a fan of their prevoius albums you should enjoy this one as well, also check out their live hhows, I have seen them play a couple of times and they have one of the best live performances I have seen for a black metal band.

Standout tracks include "Wanderer Above The Sea of Fog" and "Ahrimanic Trance". RECOMMENDED BUY