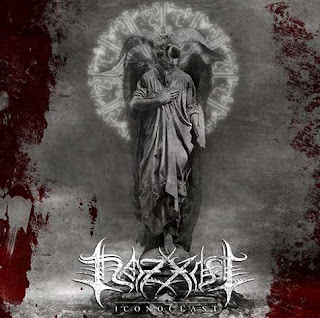 Nazxul are a black metal band from Australia that has been around since the 90's and this is a review of their new album and long awaited comeback album "Iconoclast".

Drums on this recording are mostly fast and brutal blast beats that slow down at times and become midpaced, while the keyboards which I don't remember hearing that much on past recordings sound very symphonic in a non commercial way and it gives the music a very dark and mysterious evil sound as for the bass playing it is mixed down low in the mix and is all rhythm.

Rhythm guitars utilize a lot of different sounding riffs with some being slow and melodic while others are very fast with a lot of tremolo picking, while the lead guitars are very rarely utilized but when they are used to have a very melodic atmospheric sound to them.

Vocals are mostly high pitched black metal screams which is another departure from the stuff I heard in the 90's which was war metal sounding with a lot of deeper vocals that can also are used on this album on some occasions.

Production on this album sounds very dark but still has a very professional feel and this album is not too raw sounding or overproduced they are in kind of in the middle and most of the instruments can be heard, while the lyrics some left hand path Luciferian themes as well as some other darkened topics.

In my opinion this is a good album maybe a little bit different than the last Nazxul album that I heard in the 90's but I can hear a lot of progress and this not a sell out by any means since this is still a very dark and occultic album, and if you are a fan of atmospheric occult sounding black metal you will not  be disappointed.

Standout Tracks Include "Dragon Dispitoua" and "Stain Of Harrow". A RECOMMENDED BUY.