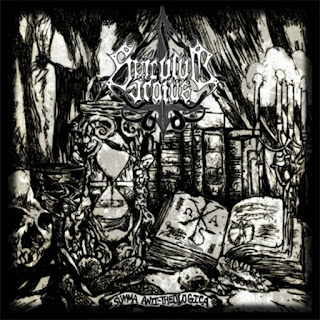 Spiculum Iratus are an underground black metal band from Los Angeles, California and this is a review of their 2009 album "Summa Anti-Theologica which was released by Baneful Genesis Records.

Drums are mostly fast with a lot of brutal blast beats being utilized, while the bass playing has a dark tone that utilizes a lot of fast riffing, as for the intros in between the songs they are very evil sounding and has a very anti Xian as well as Catholic feel with some Satanic type chanting

Rhythm guitars are very fast,raw, melodic and primal black metal riffs with a grim and depressive feel with little or no lead guitars being used, while the vocals are mostly high pitched black metal screams with some deep growls being mixed in as well.

Lyrics contain a lot of hate that contain a religious black metal feel with a very anti  Catholicism/Christian message, while the production sounds very raw and primal in the classic black metal vein, as for the cover work it is very dark and occultic.

In my opinion this is a very good from from an underground U.S black metal band and I am looking forward to hearing some newer material, they also  put on a brutal stage performance which I witnessed last summer.

Standout tracks include "Orations Recited From The Mouths of The Jawless" "Dismantle Of The Sensus Divinitatus" and "Expurgated Omnopotence". RECOMMENDED BUY.

Posted by OccultBlackMetal at 6:32 PM