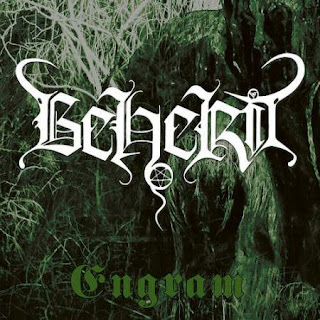 Beherit is a legendary black metal band from Finland that has been around for 2 decades and this is a review of their comeback album "Engram" released by Spinefarm Records in 2009 and unlike their first 2 albums which were more a deathgrind orientated but still very blasphemous and the 3rd album which was dark ambient this is a pure black album that sounds very modern but very original and anti commercial.

Drums are mostly fast blast beats with some occasional slow to mid paced parts, while the bass playing is all fast, primal and noisy, as for the keyboards/synths when they are utilized they are very evil sounding and have a dark ambient feel to them.

Rhythm guitars are mostly fast raw and primal black metal riffs with some occasional parts that sound very dark and doomy while some of the non distorted parts have a very trippy feel, while the lead guitars sound very distorted and melodic with little or no guitar solos being used.

Vocals are mostly high pitched black metal screams with some clean vocals and the occasional deep growls that are very ritualistic and call up the infernal names as well as the pagan gods and goddesses while the production which was recorded in D Studios during December of 2008 and mastered at KOG Studios sounds professional but still dark and primal, as for the lyrics they cover a very left hand path sinister form of Satanism mixed with dark Paganism as well as Kali worship.

In my opinion this is a good album and Beherit showed after a long hiatus that they can still compete with any new black metal band and this is a lot different than their older material, older fans kind off have mixed views on this album, but I still like this record a lot and I hope Beherit keeps recording new material.

Standout tracks include "All In Satan" "Pagan Moon" and "demon Advance". RECOMMENDED FOR ALL TRUE SATANISTS AND FOLLOWERS OF THE LEFT HAND PATH.

Posted by OccultBlackMetal at 6:54 PM