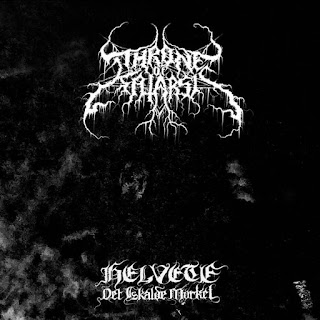 Throne Of Katarsis are a band from Norway that consists of 2 members that play a raw form of Norwegian black metal and this is a review of their 2009 album "Helvete Det Det Iskalde Morket" which was released by Candlelight USA.

Drums range from being slow to mid paced with some brutal blast beats mixed in the give the music some variety, while the bass playing utilizes a very dark tone and is all rhythm bass, as for the sound effects when they are utilized sound very evil and give the music a dark avant garde feel.

Rhythm guitars are very raw with some slower riffs mixed with a depressive doomy edge that evoke some memories of being stuck in a forest at night with some fast playing that utilizes a lot of tremolo picking but there still is a lot of mid paced parts as well, while the lead guitars are very distorted and melodic, acoustic guitars when they are used utilize a lot of finger picking mixed with full chords and there is some use of a classical guitar as well.

Vocals are mostly high pitched black metal screams mixed with with an occasional deep growl which contains a lot of agony with some clean singing that sounds very dark and sinister and brings back memories of the early 90's Norwegian black metal scene mixed in with some choir type of vocals, while the lyrics are written in a mixture of Norwegian and English languages cover a lot of topics mostly being of a very ritualistic form of Satanism along with some nature as well as some very Anti Christian themes, as for the production it sounds very professional and you can hear all of the musical instruments.

In my opinion this is a very good album and while I prefer their earlier album to this one, I still feel this is a masterpiece in its own way, if you are a fan of raw Norwegian black metal you will not be disappointed.

Standout tracks include "The Winds of Blasphemy Have Returned" "The Darkest Path" and "DET Iskalde Morkrt". RECOMMENDED BUY

Posted by OccultBlackMetal at 4:40 PM