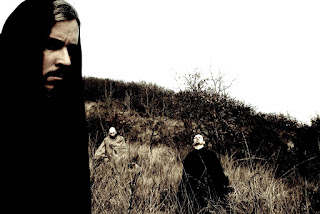 1. Can you give us an update on what has been going on with the band since the recording and release of the new ep?

I retired myself and during this time, I learned to play guitar bass, I tested a lot of different audio material, I am also interested in Budhism and I did punk music. Lafforgue continued to develop Stille Volk with Arexis. Then the latter changed direction on experimental music, he wrote two books and he makes plastic and graphic art. As you imagine, everyone is following various projects, and now the challenge will be not to spread ourselves.

2. In January you had released a new ep, how would you describe the musical sound that is presented on the recording and also how does it differ from the stuff you have released in the past?

It is very atmospheric, we can feel the Stille Volk’s experience. It differs from what we did in the latest 90’s. Indeed, Lafforgue instilled this atmospheric desire and low tempo. Arexis proposed an Ep concept by suggesting the entity of a forest, a forest cesspool whose he had the secret. I remained very aggressive in my singing to liven up the whole. Then, it was born a balance that I think we succeeded.

3. The band was playing 'pagan metal' in the early 90's when the style was not as big as it is now, do you feel that you were a huge influence on some of the earlier bands?

Yeah, I think that we have clearly mark the underground of the past years, but I think that 1996 is too far for touching new generations, I do not find myself in today Pagan. There is something that fallen asleep, I mean, the dark, aggressive, earthy, rural side, I would even say this authentic side of pagan metal. Paganism is serious, it is not a simple village festival where wine flows freely.

4. The band was broken up for 20 years, what was the cause of the split and also the decision to reform the band?

The Beginning of Stille Volk was an evidence for Lafforgue and Arexis, choices that belong to each other have been taken. But in the same vein the initial project of Sus scrofa wasn’t successful at this time, so get back together was also an evidence.

5. The lyrics cover 'Pyrean Paganism', can you tell us a little bit more about your interest in Paganism and also do you feel that the Paganism of your culture has been over looked compared to the more well-known Nordic or Celtic pagan cultures?

Yes, Arexis worked hard on it, we met in a rural land, We love mountains, earth, The Pyrenees, traditions, the mystical side of everything. In the early 90’s everyone was claiming its own culture, its belonging, its pantheon, we just did the same. I wouldn’t say that we were overlooked, or neglected, no, perhaps we were the only representatives and then you know, The Pyrenees is a very small chain of mountain across the world.


6. What is the meaning and inspiration behind the name 'Sus Scrofa'?

Sus Scrofa is the scientific name of the breed of the boar, a robust wild pig living in our French forests. The boar is both brutal confrontation and discretion, it is solitary and secret, and it is a lord in the forest, what better emblem as this one?

Yes, at the beginning, but I can’t answer to your question because we mostly worked on the recording, in studio, but the three of us have a stage experience.

8. Do you have any touring or show plans for the future?

The group is divided on the subject, but I hope that we will honor the opportunities.

9. The new ep was released on 'Nomos Dei Productions', can you tell us a little bit more about this label?

This is a Russian independent producer who produces what he likes. Furthermore, is an apolitical label contrary to received wisdom.

10. On a worldwide level how has the feedback been to your newer music by fans of pagan and black metal?

The Ep seems to really work, according to critics and fans.

Stille Volk (Lafforgue/Arexis) released their new album (Holy Rec). Antaoma (Lafforgue) will release very soon a second album. Labreiche (Lafforgue/Arexis) and Cober ord (Arexis) have released one. Arexis and Lafforgue are preparing lives for their Labreiche project. And I’m going to recording an Ep during August for my project of Black Death called Malobestio.

12. Where do you see the band heading into musically during the future?

Always atmospheric, different from the Ep. A Lp is planned next year if everything goes well.

13. What are some of the bands or musical styles that have had an influence on your newer music and also what are you listening to nowadays?

For me, a lot! I like progressive music for bass playing, I love King Crimson, who is for me the elite. In which concerns Black Metal I’m more inspired by Greek and Slav bands but I also like to listen the progression of Enslaved, the unhealthy side of Mayhem and the power of Marduk especially during live shows.

14. Before we wrap up this interview, do you have any final words or thoughts?

First, I would like to thank you for your interest in the band. For me Black Metal is a cry in the night, it is a mind that never really leaves you.

Posted by OccultBlackMetal at 4:55 PM