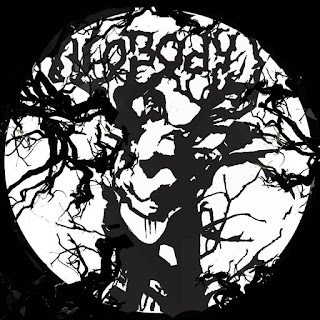 1.For those that have never heard of you before, can you tell us a little bit about the musical project?
1. I play acoustic black metal fused with Finnish pagan music influences from the pre-Christian era.

2.Can you tell us a little bit more about the musical style you went for on the ep?
2. The Finnish pagan music involves the kantele, which is a harp-like instrument that is played on the lap like a lap-steel guitar. I mimic the phrasing of this instrument with my guitar. The scales in pagan Finnish music are usually Dorian or Locrian or Phrygian in terms of the musical modes, which correspond perfectly with those of black metal.

4.Some of your lyrics cover pre -Christian Finnish pagan gods, can you tell us a little bit more about your interest in this subject?
4. I spent my youth in the forests of my hometown in Finland, invoking spirits and performing blood and fire rituals while under the influence of psychedelic drugs and encountered spirits that inspired me to connect with my country's past that was still untainted by the slave-mentality of Christianity.

5.You also mentioned some interest in the works of Aleister Crowley and other forms of occultism, how long have you had an interest in the dark arts?
5. I was first acquainted with The Great Beast when I was 15, after reading the Book of the Law. Ever since I have consumed all his work I have gotten my hands on and his influence on me is constantly present in dream visitations and through transcendental meditation, that allows me to communicate with otherworldly entities. He is my prophet and guide, but not the only one. I engage in Magick rituals daily. The "dark arts" is a wide and hard-to-define subject, and every communion opens new doors, so I do not attest to be an expert on the subject.

6.What is the meaning and inspiration behind the name 'Nobody'?
6. "Nobody" is a derogative term in the field of arts, signifying someone who hasn't "made it" in the public arena. I have taken this term and all its negative connotations to turn them around into something positive.

7.Can you tell us a little bit more about the artwork that is presented on the ep cover?
7. The Master Don Satyr who made this artwork wanted to depict the long, black winters of the North and the spiritual animal of the raven, the chosen messenger of Ukko, the blood-thirsty leader of Finnish pagan gods.

8.On the ep you recorded everything by yourself, would you be open to working with other musicians or do you prefer to work solo?
8. I am more than willing to work with other people in terms of recording and production, since it gives a new perspective to the work and lessens my workload, being a lazy soul at heart.

9.On a worldwide level how has the reaction been to your music by fans of black metal?
9. The reaction has been at this point uniformly positive, though the style I play is unorthodox.

10.When can we expect a full length and also where do you see yourself heading into as a musician during the future?
10. A full length album is finished already. Just waiting to be published by my label, Inverse Records. I see myself creating new material at a relentless pace and touring around the world.

11. I've been influenced by the great masters of old school black metal and still I am listening to them constantly. The influences are too numerous to list, and after I have gone through all the classics, I am definitely going to check out the new rising stars of the scene.

12.Before we wrap up this interview, do you have any final words or thoughts?
12. I'd like to thank you personally for choosing to spotlight my work. These days there are many great acts rising everywhere around the world, and so it is difficult to stand out from among them. I really appreciate the exposure you're giving me.