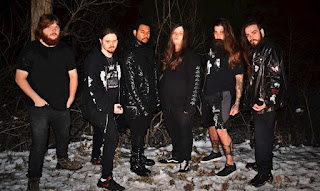 Saga: Our name is Into Pandemonium and we are a local 6 piece metal band from Dayton Ohio. The genre's that we play vary from Atmospheric metal to Technical Death metal and Melodic metal, we prefer to call Extreme metal for short.

2.You have an ep coming out during the beginning of 2020, can you tell us a little bit more about the musical style you went for on the recording?

Ethan:  For the ep Darkest Rise we wanted to try and go for something unique. We took elements and influences from other subgenres, each member is influenced by different things that we were able to blend cohesively. When a lot of the songs were made we intended to imbue what we were feeling into the progression of the songs.

3.Your lyrics cover transcendental themes, can you tell us a little bit more about your interest in this topic?

Saga: I read a lot of Sci-Fi books and think more than a person should about their own existence and the construct of what makes everything real. So lyrically I'm drawn toward topics that view the universe from multiple perspectives, sometimes these views are from creatures that I've made up for the sake of storytelling or from the views of beings I've read about in books that exist on a different plane or dimension. I enjoy the thoughts of what it would be like to exist as some conglomerate of fathomless beings to see the events of our universe in a way that I cannot as human.

4.What is the meaning and inspiration behind the name 'Into Pandemonium'?

Saga: The idea behind Into Pandemoniums' name is the way we write our music and how it sounds. The music is unpredictable, we don't really fit a specific genre besides the title of metal one song can be black metal then the other one can almost pass a folk metal song. It also is a pretty good way to describe our personal lives, none of us come from a great place we're all a mess and anytime it's time for us to gather as a band, it usually is incredibly chaotic. We have this saying in our band "When something goes horribly wrong, welcome to into pandemonium"

Saga: So the artwork was done by Heather Van Hoose, she actually came up with the design of the creature on the cover which we called The Colossus, which exist in the majority of the songs as Darkest Rise is mostly a concept album. The Colossus, in our lyrics, is apart of a race of other celestial beings like itself which are all chaotic in nature and composed of stars which is why he is floating in space. The circles around him represent Time, Space and Fire. Elements that "Colossus" is born from.

Saga: Summer Slaughter Tour 2019 Cleveland Ohio was definitely one of our best shows to date in my personal opinion we also had a show at the beginning of 2019 in Lima Ohio at Harry's Hideaway when we were without a bassist for that show. It was still pretty fun even with a member missing. It's hard to compete with the Slaughter Tour shows they are on a whole different level than what we're used to.

Saga: At the moment we do not, we would love to though. We do plan on playing some shows out of town though.

Saga: Currently, we are looking to build ourselves up more before go label hunting. We also have not received any interest at this time.

Saga: I think that we're heading into a different sound from what is going to be on this ep. I think we'll probably go more melodic than we will be heavy sound wise that isn't to say that we'll be dropping the heaviness. We expect our next production will be better constructed and recorded than what we've done with this record. Hopefully, our sound will have matured will be much more definable for us.

Saga: A lot of different influences go into our writing, there's some Marty Friedman, Watain, Leviathan, Emperor, Mayhem, Jeff Loomis, Shadow of Intent. There is a large variety of influences in the band and writing that goes into our music. As for what everyone is listening to I can't speak for them but I personally have been listening to some of the new releases that came out this year like Cattle Decapitation's Death Atlas, a little Mayhem, Hate. I've been pretty stuck on Dir En Grey's album The Insulated World.

Saga: Tough question as we all don't speak much outside of the band, I do know that some of us are big on literature, some of us do tattoos and art, some of us are gamers and history buffs. I personally enjoy fashion and video editing.

Saga: Thank you to occult Black Metal tomorrow for speaking with us!