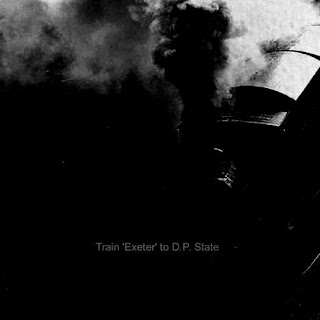 This is a review of a split album between 2 bands Deep_Pression an international band with members from Poland and Italy and Exetheris a band from Greece that has had one of their ep's reviewed as well as being interviewed by this zine and this is a review of their split album "To The Deepest Seas" which was released in 2010 by Misantrof ANTI Records. and we will start of the review with Deep_Pression a band that plays a very dark ambient form of black metal.

Drums are absent from this recording while the Synths bring a very dark ambient and atmospheric sound mixed in with distorted noises with the main song being over 20 minutes and there is no use of a bass guitar on this recording.

Guitars are all distorted sounding noises that combine black and doom metal together and there is no actual use of guitar riffing.

Vocals are all absent from this recording except for some spoken word parts, while the song themes cover dark topics, as for the production it has a very raw and primitive sound to it.

In my opinion Deep_Pression are a very great sounding drone/ambient/black/doom metal hybrid and if you are a fan of this style, you should check out this band. RECOMMENDED TRACK "The Cold Water". RECOMMENDED.

Next up is Exetheris a band that started out as being a more old school raw and primitive sounding black metal band but evolved more into a dark ambient black metal band with this new release.

Drums range from slow to mid paced drumming with not much in the way of fast playing or blast beats, while the synths bring a very experimental dark ambient edge to the music, as for the bass playing it has a very strong and powerful tone with slow doom riffs that dominate throughout the recording.

Rhythm guitars range from slow to mid paced ambient black metal riffs that have a doom metal feeling to them as well as many different time changes in the riffing mixed in with a good amount of distortion, while the lead guitars are very weird and tripped out sounding guitar solos and leads that have a very primitive approach to them.

Vocals are all high pitched black metal screams, while the lyrics cover dark, atmospheric and occult themes, as for the production it has a very dark, raw and primitive sound to them.

In my opinion this is another great recording from Exetheris which is a lot different than their demo with a more ambient black metal direction which in addition is the best band on this split and if you are a fan of this style, you should check out this recording. RECOMMENDED TRACKS INCLUDE "Behind The Mirror" and "New Orb, Same Black Color". RECOMMENDED.

In my opinion this is a very great split of ambient black metal and if you are a fan of this style, you should get this album. RECOMMENDED BUY.