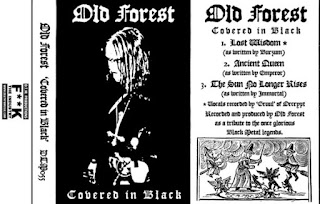 Old Forest are a band from the U.K that has been interviewed by this zine before which plays a very raw and primitive form of atmospheric black metal and this is a review of their 2010 demo "Covered In Black" which was released by D.T.M Productions and is all covers of 3 Norwegian black metal bands Burzum "Ancient Wisdom", Emperor "Ancient Queen" and Immortal "The Song No Longer Rises".

Drums range from slow to mid paced drumming with not much in the way of fast playing or blast beats, while the synths bring a very dark, and atmospheric feeling to the music, as for the bass playing it has a very dark tone with some primitive Norwegian style black metal riffing.

Rhythm guitars range from slow to mid paced Norwegian style black metal riffs, while the lead guitars are very dark, raw and primitive sounding black metal guitar solos and leads, as for the acoustic guitars when they are utilized they use full chords and finger picking to enhance the darkness that is coming out of the music.

Vocals are mostly grim sounding black metal screams with a brief use of clean singing, since the songs are covers and not written by the main person in this band they cover the dark themes that the Norwegian masters wrote in the early 90's, as for the production it has a very dark, raw and primitive sound to it.

In my opinion Old Forest do a great job and covering these classics and if you are a fan of Norwegian black metal, you should check out this demo. "RECOMMENDED TRACK "Ancient Wisdom". RECOMMENDED BUY.

Posted by OccultBlackMetal at 4:49 PM