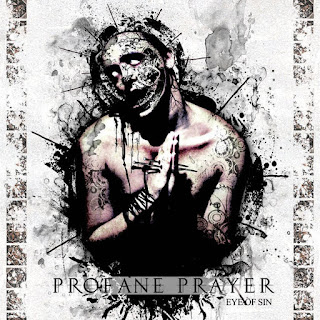 Profane Prayer are a band from Greece that has had one of their demos reviewed in this zine that plays a very raw and primitive form of black metal and this is a review of their 2011 album "Eye Of Sin" which was released by Misantrof Music.

Drums range from slow, mid paced to fast drumming with some blast beats being used at times, while the bass playing has a very strong and powerful tone with black/death metal riffing that dominates throughout the recording.

Rhythm guitars range from slow, mid paced to fast black metal riffs that are still very raw and primitive sounding but you can hear the musical progress and they added some death and thrash metal influences on this recording with a brief use of clean playing in addition they re-recorded some of the songs of the demo to give them a more modern feeling as for the lead guitars which are only used on the last song they have a traditional metal feeling to the guitar leads and solos.

Vocals are mostly high pitched black metal screams with some deep death metal growls being thrown in at times, while the lyrics cover dark,, hateful and violent themes, as for the production it has a very heavy, raw and primitive sound to it.

In my opinion this is another great recording from Profane Prayer which shows a lot of progress and if you are a fan of fast, raw and primitive sounding black metal, you should get this recording. RECOMMENDED TRACKS INCLUDE "The Widow" "Eternal Greed" "Pain Is Taking Shape" and "Under The Black Sun"> RECOMMENDED BUY.

Posted by OccultBlackMetal at 10:20 PM