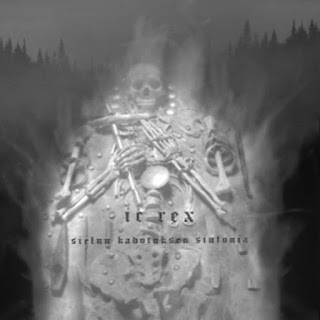 Ic Rex where a one man band from Finland that played a very atmospheric, raw and primitive form of occult black metal and this is a review of their 2005 album "Sielun Kadoruksen Sinfonia" which was released by Hammer Of Hate.

Drums range from slow, mid paced to fast drumming with some blast beats being utilized at times, while the bass playing has a very dark tone with riffs that follow the riffing that is coming out of the guitars, as for the keyboards when they are utilized they bring a very dark, ritualistic and atmospheric sound to the music with some symphonic elements that bring classical music elements without sounding over done and mainstream sounding.

Rhythm guitars range from slow, mid paced to fast black metal riffs that are very raw and primitive sounding with a brief use of clean playing in addition they songs are very long and epic sounding while the slower riffing has some doom elements to them, while the lead guitars bring in more melodic black metal guitar solos and leads as opposed to the more primitive elements of the rhythm's while still retaining some of that approach.

Vocals are mostly high black metal screams that utilize some depressive cries at times with some spoken word ritualistic passages as while as a brief use of deep demonic sounding growls and laughs in addition they are some Gregorian chants on the last song, while the lyrics are written in Finnish with themes that cover Serpent Worship, Luciferian Philosophy, Left Hand Path, Rituals, Occultism, Mysticism, Runes, Sumerian, Satanism and Anti Christian themes and with the cd comes an English translation of the lyrics for those that do not speak Finnish, as for the production it has a very dark, raw and primitive sound to it.

In my opinion Ic Rex where a very great sounding atmospheric raw and primitive occult black metal band that did not sound typical of the genre and if you are a fan of this style, you should check out this recording. RECOMMENDED TRACKS INCLUDE "Luciferin Miekka"  "Luomattoman Jumalan Pauloissa" and "Asura". RECOMMENDED BUY.

Posted by OccultBlackMetal at 3:39 AM