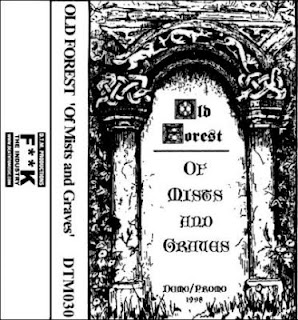 Old Forest are a band from the U.K that has had their previous material reviewed as well as being interviewed by this zine before which plays a style that I would describe as being raw and primitive atmospheric pagan/black metal and this is a review of their 1998 demo "Of Mist And Graves" which was re-issued by D.T.M Productions during the year of 1998.

Drums range from slow, mid paced to fast drumming with some blast beats being used at times, while the keyboards bring a very dark and atmospheric sound to the music, as for the bass playing it has a very dark tone with riffs that follow the riffing that is coming out of the guitars and at times they have a very powerful sound to them.

Vocals are all grim sounding black metal screams, while the lyrics cover Fantasy, Death, Mysticism, Pagan and Heathen themes, as for the production it has a very dark, raw and primitive sound to it.

In my opinion this is a great demo from Old Forest and if you are a fan of raw and primitive sounding atmospheric pagan/black metal, you should check out this demo. RECOMMENDED TRACKS INCLUDE "Hammer Of The Underworld" and "Shadow Whispers". RECOMMENDED BUY

Posted by OccultBlackMetal at 5:53 PM