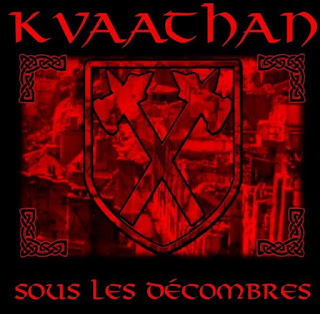 Kvaathan are a band from Quebec, Canada that plays a very raw and primitive form of martial/pagan black metal and this is a review of their 2012 ep "Sous les Decombres" which was released by BattleNoize Recordings.

Drums range from slow militant drumming to mid paced and fast playing with a good amount of blast beats being thrown into the music, while the bass playing has a very dark tone with riffs that follow the riffing that is coming out of the guitars, as for the synths when they are utilized they bring a very dark and atmospheric sound to the music.

Rhythm guitars range from slow, mid paced to fast black metal riffs that are very raw and primitive sounding with a good amount of thrash influences being thrown into the music as well as some more melodic riffing and there are no guitar solos or leads present on this recording.

Vocals are mostly high pitched black metal screams with some spoken word parts, while  the lyrics are written in French and English with themes that cover Paganism, Warrior Mentality, Patriotism, and Nature, as for the production it has a very dark, raw and primitive sound to it.

In my opinion Kvaathan are a very great sounding militant pagan/black metal band and if you are a fan of this style, you should check out this ep. RECOMMENDED TRACKS INCLUDE " The Doctrine Of Totality" and "L'Effigie d'une Âme Bâtarde". RECOMMENDED BUY.

Reverbnation
Posted by OccultBlackMetal at 11:11 PM