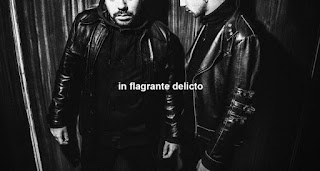 Can you tell us a little bit about the band for those that have never heard of you before?

Kapnobatis/b.e.a.s.t.: In Flagrante Delicto is a duo which came as an idea in the winter of 2013. We started writing stuff and recording in our home studio a few months later. We wanted to relate to the black metal scene in the personal way we perceive it, as we understand as fans and followers of the genre, its various political problems, mostly around nationalism and fascism. This idea of the white pride black metal simply disgust us, so we made an effort to put ourselves in the position of making some kind of pessimistic radical black metal.

How would you describe your musical sound?

Kapnobatis/b.e.a.s.t.: Our music is a mix of dark ambient, drone and black metal.

The song themes are inspired by antifa/anti-sexism, and diy ethics, can you tell us a little bit more about it?

Kapnobatis: Both of us are involved for years in radical, queer and LGBT movements in Greece and we find ourselves strongly against everything that is considered normal and natural by society. We believe that every identity must be considered and visible as long as it is not attacking other bodies and identities. Feminism and women rights are a major subject in our political values and we understand that oppression and violence over women are coming from the patriarchy which is based 99,9% on the privileges of males.  We wanted to bring these ideas in the black metal scene as we feel that we’re not the only ones who see this sexist, right wing theme as completely dangerous and problematic.

b.e.a.s.t.: For me individual and social liberation are very inspirational matters. I believe that if you want to change something you have to know it, so in order to see and take part when the world is changing you have to know yourself and society. Darkness is part of ourselves and we have to recognize it if we want to a change, but most people don’t care about their relationship with that, they just prefer to look away. Black is the color of liberation, and liberation means that we have to set our borders not others not the nation, not the race, not some ancient wisdom or aliens and not the oppressive elements of the society. We are responsible for ourselves and black reminds me of it. Nationalism, sexism and racism are some of the enemies of the liberation, we have to destroy them in order to be enlightened with the spirit of freedom and spread it. Also it is very nice to see people in black metal scene that don’t like neo-nazis like Attila, Blut aus nord, Salem, Panopticon,ect.

What is the meaning and inspiration behind the bands name?

Kapnobatis/ b.e.a.s.t.: In Flagrante Delicto means ‘’ in the very act of committing a misdeed’’ and it also comes as an idea from the same title song of SPK, a noise/industrial band, we both love.

Has the band done any live shows or is this strictly a studio project?

Kapnobatis/ b.e.a.s.t.:: We must find some self discipline and start to do rehearsals, I think. At the moment we are a studio project but we would really like to play live.

Currently you are unsigned, are you looking for a label or received any interest?

Kapnobatis/ b.e.a.s.t.: The project is very new and we didn’t have the chance to promote it properly –yet.  But we prefer to keep it d.i.y. because we want to support the newborn anarcho black scene in Greece. We want to cooperate with other bands and fight all against the nationalist ideas.

On a worldwide level how has the feedback been to your music by fans of suicidal black metal and dark ambient?

Kapnobatis/ b.e.a.s.t.: The dsbm audience was really warm with our EP and it actually made us very happy, because you know, when you publish your art you always have the stress of the feedback. On the other hand there are people that don’t seem to feel very happy about the project. A few days ago a greek fascist left a hateful comment under our video in youtube. You see the point?


Are there any other musical projects going on these days?
b.e.a.s.t.: As I ve been around underground music for several years , I play at a guitar drone/industrial band called Black Spring, a rhythmic ambient project called “to travel without any certain destination” and a power noise act called “last days of s.e.x.”

What direction do you see your music heading into on future releases?

Kapnobatis: I have no idea about that but I would love our next release to be more aggressive.
b.e.a.s.t.: We will see, but in the future we will experiment with more aggressive black.

What are some bands or musical styles that have influenced your music and also what are you listening to nowadays?

Kapnobatis: Inspiration comes from various genres which are not necessarily metal. We listen from 80’s new wave and punk to doom and black metal. There is not such a particular band that made us write music. My personal favorite albums this period is “Andacht” by Lunar Aurora and “Vancouver Missing Woman’’ by Vegas Martyrs. Burzum’s “Filosofem” is also an all time classic for me (although I hate Vikernes).

Any final words or thoughts before we wrap up this interview?
b.e.a.s.t.: Thanx for supporting our ideas and sounds.

Posted by OccultBlackMetal at 12:07 AM