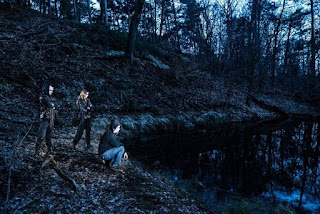 1. Can you give us an update on what has been going on with the band since the recording and release of the new album?

Asgrauw is busy rehearsing and writing new material. Since our new album ‘Gronspech’ was finished, we blasted off writing a couple of icy tracks for a new concept split or EP.

In 2010, Asgrauw  started as a raw, straightforward no-nonsense old skool black metal band. Since, we went in a more atmospheric direction that you find on ‘Krater’. The new album ‘Gronspech’ builds on this and is more varied. With added spoken words, synths, field recorded samples and distorted bass lines. Asgrauw worships 2th wave of Scandinavian Black metal. We’re heavily influenced by bands from the golden era like Ulver, Arckanum, Dodheimsgard, Emperor and Dimmu Borgir. But we break those nineties boundaries by adding personal touches to the music. Every band membe adds something unique to our sound. Kaos is rooted in pissed-off streetpunk, while Faal likes raw and unpolished black metal. Batr is nostalgic about atmospheric 2th wave black metal, while he’s into fusion jazz and psychedelic music. Throw these influences in a rusty old concrete-mixer and there’s Asgrauw.

3.On the website you have also cited an infleunce from the People's Temple suicides in the 70's, can you tell us a little bit more about your interest in this cult?

We’ve released the “Utopia” 7 inch split with Meslamtaea. Both sides of this vinyl record deal about our pessimistic view on mankind. The Peoples Temple was guided by the charismatic megalomaniac Jim Jones that became a ‘God’ for his brainwashed, fear-filled community. At the end, their rainforest paradise was crushed and Jim accompanied his people to death with poison. In our views, this is not much different from what’s happening with the world on a global scale.

4.What are some of the lyrical topics and subjects you explore on the new album?

We always write lyrics about topics that interest us, and those often differ from the average black metal themes. We keep all the lyrics for ourselves. The second album 'Krater' is about the post-apocalyptic world after an exploding supervulcano, which is unfortunately a realistic vision (Yellowstone). The new album 'Gronspech' is something different and it sounds more nature-inspired. Gronspech was the first name of the town Groesbeek: a name that was written on a document from year 1040. Asgrauw is rehearsing in Groesbeek, and two of our  members have their roots in this town. Hence the above-average interest in local history, old stories and legends from Groesbeek.

5.What is the meaning and inspiration behind the name 'Asgrauw'?

The band name Asgrauw has multiple facets. Asgrauw is a ash-grey color, a state of mind and a moonphase. Every meaning of the word is negative. Just like us.

Good performances? Well, most of our gigs are in local dirty shitholes for a handful of drunken people. ‘Sathanas in Gloriam’ in Baroeg was definitely a highlight for the band (as far as one can speak about a highlight), and Diabolical Echoes in Maddogs (in our hometown Groesbeek). Both are quality black metal festivals. We perform our shows with lack of any stage-entertainment. We only play for ourselves. In a number of live reviews we are blamed for that. Good! For us it’s only about the music and the negative atmosphere that it breaths. There’s no fun involved and the band is introvert and apathetic. Don’t like it? Don’t book us. In a live-situation we are a completely different band than on our records. On a stage we are a rancid black-punk trio. We play everything (too) fast, dirty and loud, while on the records we are much in control.

7.Do you have any touring or show plans for the new album?

8.In 2017 you where a part of a split with 'Meslamtaea', what are your thoughts on the other band that had participated on the recording?

Meslamtaea is a one-man project and that guy is our drummer and producer. So we can’t say what we really think about his music, haha!  Meslamtaea is a unconventional black metal project that was raised 20 years ago. Everything has been played by Batr himself. On the 7 inch, though, Kaos contributed with spoken poetry. This went out so well, that he did this on our new album Gronspech very frequently.


9.On a worldwide level how has the feedback been to your music by fans of black metal?

It’s always pretty much quiet and silent around the band and that is because we do not put effort into promotion. We’re in the rehearsing room rather than on Facebook, where the whole black metal thing seem to happen these days. Fuck that shit. Asgrauw was raised only for ourselves and we have no ambition to become Internet pop-stars. Black metal is a bit of a thing from the past for us, we're nostalgic about the times of cassettes and vinyl and copied black/white zines. Asgrauw’s only purpose is to expose our induvidual negative emotions in an expressive way.

We don’t have 10.000 noisy drumcomputer projects going on, desperately hoping for one that becomes the new hype. Asgrauw is no #1 priority for every bandmember. Faal is also guitarist in Walpurgisnacht and Batr is multi-instrumentalist in his projects Sagenland & Meslamtaea, while he's doing session work for bands like Cultus and Heervader.

We follow our own individual and egocentric path and we never know what happens next week. We are working on new material that is more difficult and diverse to play than what we’ve done before. But a hateful, cold and atmospheric sound always predominates.

We listen a wide variety of music. Of course old skool black metal, mostly 90's stuff. But we also put much inspiration from street punk, fusion jazz and 70’s psychedelic stuff.  Don’t like it? Good!

Posted by OccultBlackMetal at 9:32 PM