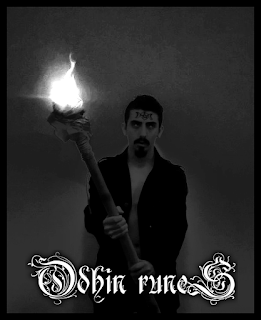 1.Can you give us an update on what is going on with the musical project these days?

In these times I am composing songs for the first album of the project. It will consist of 9 tracks loaded with speed and more hypnotic.
Different from the first demo but without leaving the classic formula. I can not count anymore because I can not even know how the songs will come out. It depends on the inspiration that can be in these months.

2.How would you describe the musical sound of the material you have released so far?
The rustic sound was manufactured by two factors; A) - the captured sound of air or "atmosphere" (voice and guitar), B) - captured in a small room (the drums and bass).
The sound too polished or clean in Black Metal is characteristic of the current metal. And not the '80s and' 90s, which is the one I want to replicate
to Odhin Runes.

3.A lot of your music has the more underground 90's style, what are your thoughts on the more modern styles of black metal?
People have changed a lot since the beginning of Black Metal. The third wave of Black Metal began to add a lot of sound quality and professional arrangements. It does not bother me. I only have the fear that if we follow this path of sound cleaning, we can end up with a heavy metal without distortion. Distortion is what identifies us and this contemporary Black attempts against this. A lot of makeup and no music. That is the harsh truth.

4.Both the lyrics and band name deal with Wotanism and Asaturu, can you tell us what these mean to you?

Use the Germanic symbols at random, as I will now use the oldest ones in Norway. The atypical aspect of this project, and perhaps different from other lyrics or lyrics, is that I take the runes for what they really are; objects with a very strong spiritual charge and that served for many tribes, colonies and communities as a way of
understand the nature and sustenance of their divinities. Before the arrival of Christianity. The political and the race is far from Odhin Runes. "We are One"
just clarify that; we are all one, white, black, stones, sea, stars and animals. The runes were also in America when the Vikings discovered it, and that is beyond our understanding.

5.On the recordings you play all of the instruments and do the vocals, would you be open to working with other musicians?
Impossible. The conditions with which I record and the long time I dedicate to these works would make me never reach an agreement with other musicians. I have my times and they are very slow.

6.In 2017 'Black Noise Records' re-issued your demo onto cassette, can you tell us a little bit more about this label?

Black Noise Records is a very good label and had the generosity to help me spread the work in cassette nationally and internationally.
I'm grateful for that

7.You where also a part of an album called "Split Of The Three Souls", can you tell us a little bit more about your contributions to this recording and also what where some of the other bands that had participated on the recording?

It is a beautiful question! Mexico has a very complete musician named Cain Vidal Felipe (Echoes Suicides) who is a Black Metal Depressive musician
also a painter, sculptor, comic book artist, in short many virtues that made me come closer to form alliances with him. Tardum Mortem is another soloist, colleague of the neighboring state called Malfas Gurson with whom I have a closeness since we have the same musical tastes and some crazy things. They all did a very good job and they were 3 months hard of composition, we wanted it to be a perfect Split although it was not very well known, we gave our heart and that is important.

Wow, it would be great to have a better arrival in other countries. For now, the project is very underground and only here in Latin America did it get good reviews.
Maybe they understood the concept, I do not know. For me it is very good, it was accepted.

9.Where do you see yourself heading into as a musician in the future?
Perhaps the pessimistic look I have makes me answer this, but I feel that this is like a rain in the desert, then it happens and in the meantime I will give my best. Until I get tired and leave everything.
I also try not to think about the future. Let what the universe has prepared be bad or good.

10.Can you tell us a little bit more about 'Peste Producciones'?

Peste producciones is my little label where I produce Underground bands, now it's in a "Stand By" mode. Soon I will be with more productions of thrash bands, Black, Grindcore, Death and punk.
All under the concept '80 / '90 primitive sound.

I just replicated the sound and style of the second Norwegian wave of Black Metal such as Burzum, Darkthrone, Ulver and Mayhem.
Although unconsciously it may be influenced by many styles such as 1920s jazz although it may not seem so. I am currently listening to Shoegaze.
I let the music flow but if those would be my musical bases. Strange bases

Collect wines and plants. Meditation. Play with my little nephews. Cooking, watching horror movies in black and white. Horror cinema class B vintage. I do not go to parties. Reading about science and ufology. A life not very fun XD.

Yes, I appreciate this interview, Mr. Loki. I find an interesting page Occult Black Metal Zine, and I invite everyone who reads this; that they can
Enjoy the other bands that are in the blog. Among all we can make the black metal scene does not lose the essence, the magic, the feeling.
Let's not let this marketing circus only be for bands with platinum records. There are many bands with many ideas you just have to support them. A hug. 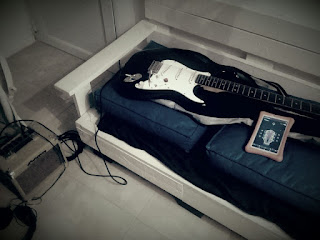