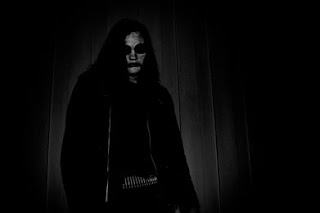 1.For those that have never heard of you before, can you tell us a little bit about the musical project?
1. Well, the project was spawned in December 2016 by me, LDB, as some of you might know. It was created in the depths of Pomerania, with a concept based on eternal darkness and Satanism mixed with misanthropic and philosophic values

2.Recently you have released an ep, how would you describe the musical sound that is presented on the recording?
2. To be honest, I think that the sound went out pretty raw and chaotic. At some point, that was something I wanted to accomplish, but there’s still much I must learn. Definitely, this material helped me with understanding music, the mixing/mastering process, the composing process and so forth. After some days of break, I would have changed the whole sound of guitars, as the guitars are not that heavy as I wanted and sometimes it is hard to hear the riffs. Worth mentioning that there’s no bass lines whatsoever. But in general...as the first material created ever, the EP’s spirit is quite good. The mission has been completed.

3.Your lyrics cover Satanism, Philosophy and Misanthropy, can you tell us a little bit more about your interest in those topics?
. There’s not much to say, really. I’ve always had more philosophic view on the world, been interested in non-typical questions regarding existence and so forth. Hence it was a natural choice to me. Misanthropy and Satanism came later on, but it’s not something I want to talk about…

4.On the album cover you used a painting from Gustav Dore, can you tell us a little bit more about your interest in his works?
4. I was in search for a cover art which would describe the feelings of the songs and my current position in life. I kept looking for quite long time, as nothing persuaded me enough, and someday I found a cover art which completely blew me up. I am a bit interested in painting art, and knew who Gustave Doré was, but, like I’ve written above, nothing at that time convinced me that much to put it as an album cover, until I had a more intense look at his works. Therefore, Doré’s “The Night’s Plutonian Shore” was a natural choice.

5.I know that the bands name comes from the computer game 'Gothic II', can you tell us a little bit more about your interest in computer games and also how does this name fit in with the musical style you play?
5. I used to play a lot of video games back in the days. It was some form of escape from the routine or making life more shiny in this worthless society. As well as reading books, listening to music, watching movies, doing sport and so on. Contrary to appearances, the name does NOT have anything to do with my music and it’s not any “Gothic-based” black metal, as many people think/believe.

6.On the ep you had recorded eveything by yourself, would you be open to working with other musicians if they shared the same visions as you?

6. Hard question. Embarla Firgasto is my child, my complete vision, I do whatever I want. No force, no ban, no conflict. Just unity. Me and project. Honestly, I am not really interested in any cooperation regarding the project as I want to have everything captured as I wanted from start. In addition, I am literally fed up with people, their arrogance, stupidity and childishness. At the beginning, Embarla had to be…let’s name it „a band”, containing of band members, but after a while I realized that those people I had to work with were simple worms who were interested in being in a band just because of status and maybe some sort of hobby/free-time activity. I ended up with individuals who wanted to make some idiotic mix of black metal and punk (!), who could not even play to a metronome or who were interested but when it came to the money-topic or being devoted to death, they suddenly lost interest. I started to do everything on my own and learned playing several instruments since. There’s very few people you can count on. If you’re disappointed at someone…do it yourself.


7.Currently you are unsigned, are you looking for a albel or have received any interest?
7. Yes, I am still looking for a label that would like to create CD format of “Inter Spem et Metum”. I sent several messages, but nobody was interested so far. So…if any black metal label would be interested in releasing it onto CD format, contact me.

8.On a worldwide level how has the feedback been to your music by fans of black metal?
8. So far so good. The feedback is positive, what surprised me a bit, but what’s most important – this is a constructive feedback, what makes me better and better next time.

9.When can we expect a full length and also where do you see yourself heading into as a musician in the future?
9. Oh…good question…I don’t know it myself. Creating EF material is always full of mental pain…but also naturality at the same time. For now, I need some rest due to mental problems and current life situation. In fact, I am giving you my word of honor, that the next material will be out sooner or later.

10.What are some of the bands or musical styles that have had an influence on your music and also what are you listening to nowadays?
10. I am mainly listening to music which could inspire me to write new material, but also music where I can feel heart and soul. Deathspell Omega, Aosoth, VI, Antaeus, Blut aus Nord, Elysian Blaze, Xasthur, Mgła are definitely the quick examples of bands which highly inspire me and have a big influence on me and my music. Besides black metal, I listen to classical music, ambient, a bit death metal, acoustic music and from time to time some rock like Pink Floyd or The Beatles. Many different inspirations, in brief.


11.What are some of your non musical interests?
11. I read books, for example. At this moment, I read “Futu.re” written by Dimitry Glukhovsky. Interesting concept of what our world would look like if we would be immortals. Not big fan of this science-fiction aura, but overall – highly recommend it. On the other hand, I spend time with my closest ones, search for inspiration, wonder about the sense of existence and…that’s it, basically. 90% of my life is music, actuall

12.Before we wrap up this interview, do you have any final words or thoughts?
“From such crooked wood as that which man is made of, nothing straight can be fashioned.” – Immanuel Kant

Posted by OccultBlackMetal at 9:22 PM