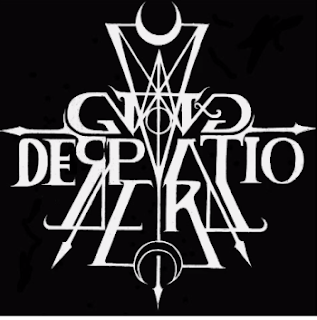 = It begins in the middle of the year 2009 with two integrants, D.V and myself Vel. This band is born from the restlessness process of expressing certain ideas and visions in parallel to our other solo projects. D.V comes from M.C.C and me from Velork.

2. So far you have released one full length, can you tell us a little bit more about the musical style you went for on this recording?

= For this production which is the second, we tried to use different lines inside the Raw Black Metal genre also some Depressive and Doom elements.

= Our lyrics are based on death and its transcendence, the dark and shadowy parts of the mind, the capacity we all have to create and to destroy. Far from empty dogmas and idolatries always parting from the will and power of each one of us with an esoteric focus we proclaim the curse and the decease of humanity itself.

4.What is the meaning and inspiration behind the name 'Nox Desperatio'?

= It is literally translated as "Nocturnal Despair" the opposite side of calm, the night represented with its mysteries far from light, its name is developed in the field where the tormented consciousness dwells.

5. The album cover had a lot of occult and alchemy symbols', can you tell us a little bit more about your interest in the esoteric arts?

= We've always felt very intrigued by those since our early ages and it has remain the same. The need to obtain more knowledge, to experiment and do more as well. This design is under the strokes of BMS Illustration after we suggested some ideas, he came up with this and we are very pleased.

6. Currently there are only 2 members in the band, are you open to expanding the line up or do you prefer to remain a duo?

= If the situation changes we could be open to include other members to the band but right now we are satisfied with how we've been working together and this is the result.

=  Of course, we never thought we would have such reception with the people out there. We feel always grateful with Centurion and Unpleasant for giving us the opportunity, it is a great labour what they do in order to broadcast the new proposals of the genre not to mention the exposure the band receives worldwide so... it is of great value to us who develop in this art condemned to exile.

= I think it has had a great reception like I mentioned before, the mix has been of interest to the public and we are glad to know that.

9. When can we expect new music and also where do you see the band heading into musically during the future?

= We are currently working in a full length production which is named 'Incineratio Arcana Nocte' this will have 8 songs charged with lots of strength, hate and chaos. We will be announcing more novelties about it soon and we will continue working in the future that's how we visualize ourselves, spreading this art without layers, more studies searching always for evolution inside our lines in order to raise even more the projection we could have and with this, offer something true with a heavy content

= When it comes to Nox Desperatio it could be said it has influences of genres that go from Raw Black, Depressive, Suicidal to Classic Doom to mention just a few. About other bands well it's a bit difficult to say because it takes a bit of time to pay atenttion with detail, we have stayed in the corrosive and destructive sound of the last decades, it varies a lot in the influence tha we integrate in Nox Desperatio.


11.What are some of your non musical interests?
= Martial arts, knives, guns, history, science and esoterism.

12.Before we wrap up this interview, do you have any final words or thoughts?
= Last but not least we are very grateful with Occult Black Metal Zine for the opportunity and support, we are hoping to cross paths in another occasion and always reminding to keep in mind; we have to seize the day since our time in this place is brief, so take advantage of every chance to fulfill your objectives but with a strong attitude.

Posted by OccultBlackMetal at 9:05 PM