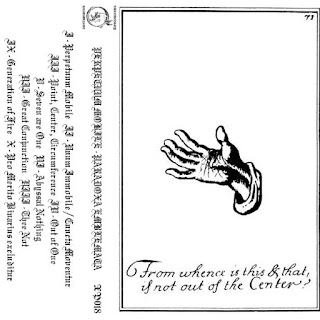 Perpetuum  Mobile  plays  a  musical  style  that  takes  raw  black  metal,  grind  and  hardcore  punk  and  mixes  them  together  to  create  a  sound  of  their  own,  the  production  sounds  very  raw  and  heavy  while  the  lyrics  are  a  concept  album  based  upon  mystic's  Dionysus  Andreas  Freher's  opus  "Paradoxa  Emblemata".

https://xenoglossyproductions.bandcamp.com/album/paradoxa-emblemata
Posted by OccultBlackMetal at 5:08 PM