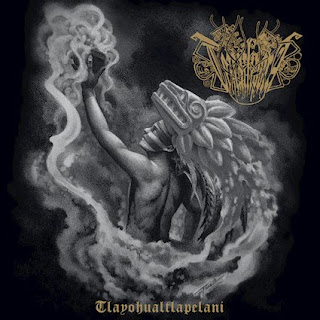 Rain  and  thunder  sounds  start  off  the  album  before  going  into  a  heavier  direction  which  also  introduces  grim  black  metal  screams  onto  the  recording  while  all  of  the  musical  instruments  have  a  very  powerful  sound  to  them  along  with  some  folk  instruments  also  being  added  into  certain  sections  of  the  songs.

Tezcatlipoca  plays  a  style  of  black  metal  that  is  very  raw  while  the  elements  of  Aztec  folk  music  gives  the  songs  more  originality,  the  production  sounds  very  powerful  while  the  lyrics  Aztec  Occultism,  Mythology  and  Sorcery  themes.

http://soundcloud.com/iron-bonehead-productions/tezcatlipoca-huey-tlatoani-1/s-c7kRZ
Posted by OccultBlackMetal at 7:39 PM