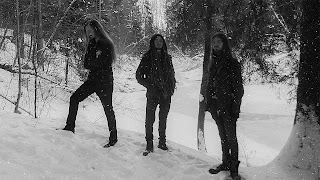 Marrasmieli was formed in early 2018 with the aim to create metal music inspired by nature, mythology and days of old. There’s three individuals in our band: Nattvind on vocals and drums, Zannibal on guitars and Maelgor on bass. Our music is atmospheric and epic and we also utilize instruments outside of the metal genre in our music such as flutes and acoustic guitars. We don’t preferably want to lock ourselves into any metal genre but one could describe our music as folk/black metal.

2.You have an ep coming out during the end of September, can you tell us a little bit more about the musical style you went for on this recording?

When we started working on the songs the only thing we had planned was that it would be "something like black/folk metal". Zannibal wrote both of the songs for the EP, and when he started (with "What Nature Fears") his idea was trying to mix Burzum-like ambient black metal with folk. However, as the song progressed it became more melodic and catchy. It was soon obvious that it's not going to be anything like Burzum (altho you can still hear the Burzum influence in the monotonous intro of What Nature Fears). "Marrasmieli" was the second song we did and it was a more straightforward process. Zannibal was just jamming on acoustic guitar when he came up with the chord main progression and after that everything just came along naturally.

We don't have any strict rules for the lyrics, as long as they they somewhat fit the aforementioned themes. "Marrasmieli" was such a melodic and catchy song that it felt like a perfect song to be our band's title track. "What Nature Fears" was a bit more difficult to write. It's a long song but you can fit surprisingly little text there. At the time Zannibal was reading a Lovecraft collection and so he decided to try if he could make a little Lovecraftian story that fits the folk theme.

4.What is the meaning and inspiration behind the name 'Marrasmieli'?

It’s a combination of two Finnish words. Marras is an old word for the word ”death” but Finns associate it with marraskuu which is November in Finnish and therefore wakes feelings of coldness and winter. Mieli means spirit, mood or mind. There’s not any special meaning behind the name. It’s just a name that represents the feelings that we want to invoke with our music.

It's simply a photo from a small local nature reserve taken by Zannibal.

We haven’t played any shows yet. We have just been concentrating on creating music and getting our EP out. But we guess that our live shows would offer something more than your average metal shows.

Not at the moment but who knows what the future will bring. We would need more people in our band at least for live shows.

8.On a worldwide level how has the reaction been to your music by fans of folk, pagan and black metal?

Well our EP isn’t out yet so we don’t know the full reaction yet. But our EP has been getting really good reviews and what music people have heard from it they have been very pleased.

The new material that we have written pretty much continues in the same vein as the EP but there are new elements in it as well. We want to keep our music evolving and getting better all the time even if the main inspiration behind it remains the same. But the main musical direction with this band will always be metal even though we are influenced by music outside of metal too.

Mainly folk metal and black metal. Moonsorrow is one of our all-time favorites. Some other bands that have influenced us during our lives are for example Darkthrone, Agalloch, Burzum, Turisas, Wintersun, Panopticon, Summoning….. The list could go on forever. We’re all open-minded when it comes to music but metal still gets consumed the most in our band. You can find something good in all genres though. Except Finnish reggae.

11.How would you describe your views on Paganism?

To us paganism means respecting nature and the place we live in. Embracing ourselves us as part of a bigger entity.

Thanks a lot for the interview and for reading it! Make sure to check out our debut EP Marrasmieli which is coming out on the 29th of September through Naturmacht Productions. If you want to support us you can go check us out on Facebook and give us a like. The future of Marrasmieli seems very bright and productive so stay tuned for our future music. Cheers and kippis!