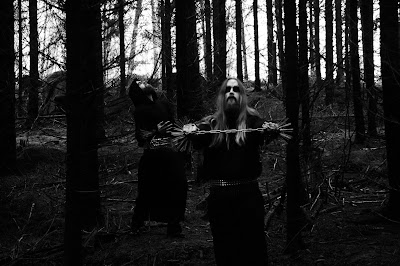 Begrafven is a swedish black metal band and the idea of it started in 2011 and it should have been a project consisting of me (Maturz) on guitar, drums, vocals and S.L. on bass.

In 2012 I talked to Ursus about Begrafven and he really liked it and shared the same vision, so he joined on lead vocals and guitar. S.L. later had to leave the band for personal reasons and we have continued as a duo since.

2.So far you have released a demo and a full length, musically how do they both differ from each other?

They do not differ at all since all songs on ”Dödsriket” were written before the demo. We choose to record two of those songs as a demo. These two songs are on the album as well.


3.This is also your first release in 7 years, can you tell us a little bit more about what has been going on during that time span?

We have had a lot going on in our personal lifes that has taken up much time. We also waited for Tehom Studio to be finished since it’s been rebuilt with new equipment and that took longer than expected.

The recording sessions had some backlashes. For example, first day recording drums I kicked a chair in anger and nearly broke a toe. Stupid. So I couldn’t play drums for a couple of months.

4.What are some of the lyrical topics and subjects you have explored so far with the music?

All songs of this album, in one way or another, is about Death.

5.What is the meaning and inspiration behind the name 'Begrafven'?

The name Begrafven translates to Buried. We thought it was very fitting to our music and lyrics.

Since the album is about Death, it felt obvious that Death himself would adorn the cover. Then I had the idea of having something from where we live, so we choose Nybro church for the background.

The artwork is drawned by S.L., former bass player of Begrafven. She took these classic themes and drew them in a less classic way. Which we liked.

We will probably always remain a duo, however, in the future we hope to find a drummer and bass player for live performances.

8.The new album was released on 'Unexploded Records', how did you get in contact with this label?

I came in contact with Unexploded Records when my other band Elimi had some problems with the release of the album ”Asylum”. The label who released it just disappeared so Unexploded re-released it.

When the ”Begrafven” demo was done we sent it and got signed.

The reactions we have received so far have been above our expectations.


10.Are any of the band members currently involved with any other bands or musical projects these days?

I am involved in two other musical projects: Elimi and Blod Eld Död.

Ursus is working on material for another project.


11.Where do you see the band heading into musically during the future?

We are rehearsing the material for our second album at the moment, which is in the same vein as ”Dödsriket”, so we will just continue to do what we do. And hopefully, it will not take another 7 years.

We are not consciously influenced by any specific band when we write music for Begrafven, but of course we are inspired by black metal, but also heavy metal and progressive metal.

I am listening to a lot of music but at the moment there aren’t any specific. I always return to my all time favourites though, which is: Iron Maiden, King Diamond and Dream Theater.

If you’re into melodic black metal of the northern kind you should check out the track ”Frostfödd” on youtube. It’s taken from our upcoming album ”Dödsriket” which will be released in August.

https://www.facebook.com/begrafven
Cheers,
Posted by OccultBlackMetal at 11:27 AM