The Kingdom Of Peace Interview 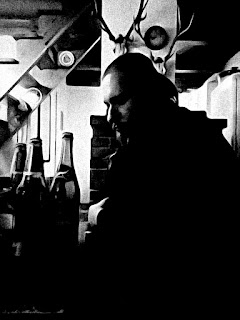 1.For those that have never heard of you before, can you tell us a little bit about the musical project?
1. The Kingdom of Peace is a one-man project from Warsaw, Poland, founded in 2017. I didn't like the musical effects that came with working with other people, so I decided to do everything myself. Even if the end results would be very bad. Today I returned to working with others in different projects, but The Kingdom of Peace is still a display of my individuality.

2.You have released a good amount of music with this project, how would you describe your ,musical progress over the years?
2. In fact, most of the songs that have been (and will be) released so far were written many years ago, before this project was even created. I was waiting for the right moment when I would feel that my skills and knowledge would be appropriate so that I could record all the music myself. Of course, my knowledge of computer sound processing has developed since the first demo and technically it is completely different - for me it is important to remain true to the original assumptions despite the continuous development. In my case, it was making raw, dirty music

3. From the very beginning, the leitmotif of the lyric is misanthropy. These are most often my personal thoughts about mistakes made by humanity, and myself.

4.What is the meaning and inspiration behind the name 'The Kingdom of Peace'?
4. Here's all the credit of my older brother. He is a huge fan of the books by Jack Ketchum, who wrote the "Peaceable Kingdom" short story collection. I really liked this title, which after reflection turned out to be very relevant to the whole vision of my project. By the way, I highly recommend this book, it shows humanity in a very similar way to how I show it in my lyrics.

5.With this project you record everything by yourself but have experience working with other musicians, how would you compare the two?

5. As I mentioned before, I was never satisfied with the end result in the bands I played for. I hate compromise, and the moment I started creating everything myself, I started to be happy with what I heard. This year I have come back to playing with others, but these are only projects with people I can rely on and I know we have a similar view of music.

6.You also have a live line up for the project, what are some of the best shows that you have played so far and also how would you describe your stage performance?
6. There was a plan to play one concert in my city, but due to the pandemic, the show did not take place. I don't know if the desire to play a concert with this project will come back after this mess.

7.Since 2019 you have released a good amount of material with this project, do you spend a lot of your time writing and creating music?
7. As I mentioned, most of the music and lyrics were written before this project was created. Nevertheless, the whole creative process took me several years. I'm currently recording my second full-length. There will be a lot of ideas on it that I did not use on my debut.

8.You have also been a part of a couple of splits and a collaboration, can you tell us a little bit more about the musical projects you have shared these recordings with?
8. It all started with the Greek band Vintermorke, who wrote to me about a joint recording. In the meantime, I got in touch with Alex from Australia and we were working very well, thanks to which we released two splits together. I didn't want to record that many splits, but I liked the vision of each of the bands and couldn't resist.

9.You have also worked with 'Corpse Torture Records', 'Ars Ater Records', 'Depressive Illusions Records', 'Life End Records', and 'Nailed Nazarene Industries', do you feel these labels have been very helpful when it comes to getting your music out there heard?
9. Let me start with the fact that Life End Records is my personal label where I record my music on cassettes for promotion purposes.  I wrote for the rest of the labels myself. I wanted to release with them, mainly because I like the music they release. Personally, I have very good memories of working with them and I highly recommend them.

10.On a worldwide level how has the reaction been to your music by fans of black metal?
10. I don't really look at the opinions of others, I create music for myself and I should be satisfied. But sometimes I get different opinions, sometimes bad, sometimes good. I don't care.

11.What is going on with some of the other bands or musical projects these days that you are a part of?
11. We are currently preparing with Ścierwo to record an EP for a split. Forgotten Quests is most likely a closed chapter in my life. I plan to focus more on Thermal Annihilation as I have a need to create some noise music. The rest of the projects are just "fillers" of my free time. I would like to set up two more projects, but at the moment these are only plans that I will not talk about yet.

12.Where do you see the band heading into musically during the future?
12. I became very attached to The Kingdom of Peace. After all these years, it has become an important part of my life. Unfortunately, I currently have health problems that may one day prevent me from playing guitar for as long as I do now. I would be happy if everything turned out well and could continue the life of this project. However, if something goes wrong, I will have to close this project and focus on noise, drone and avant-garde music. Even though the music will be completely different then, the message will remain the same.

13.What are some of the bands or musical styles that have had an influence on your music and also what are you listening to nowadays?
13. I have always liked black metal in slow tempos and melodic riffs. My first inspiration was Mgła, which inspired me to create this type of music. Then came bands such as Human Serpent and Beherit. I wanted to create a slow, melodic metal that had raw production. Currently, I listen to music that has nothing to do with my inspirations. Recently, I returned to listening to grindcore, got into the blues from the 60-70s and I started listen Japanese noise music.

14.Before we wrap up this interview, do you have any final words or thoughts?
14. Support the underground.

Posted by OccultBlackMetal at 5:00 PM