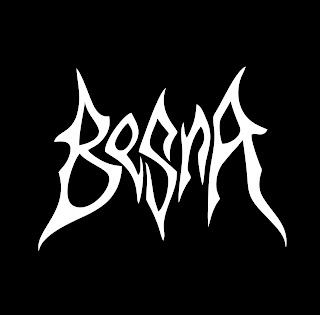 1.For those that have never heard of you before, can you tell us a little bit about the band?
Pinto: We are an extreme metal band from Slovakia, mixing harsh metal genres with melodic guitar lines to create long compositions. All of our lyrics are in our native tongue.

2.So far you have released an ep and a split, musically how do they both differ from each other?
Pinto: We feel the music and the direction is evolving all the time. We've only really gotten the 'post-black' metal label after having written the songs from the EP, and I think we've leaned slightly more towards that direction on the split. It also made sense to pick the songs better aligned with the Abyss' music this time.

3.What are some of the lyrical topics and subjects the band has explored so far with the music?
Pinto: The common theme on the EP were the feelings of isolation and loneliness being experienced by the people of age, feeling out of place and lost in the world they were left in. This time (on the Abyss split), we've dug a bit more into the religious symbolism. But the aspect that brings together all of our lyrical endeavors is in how the narrative of the songs is being tied to the nature and folklore we've grown with.

4.Originally the band was known as 'Rotting Gutless Corpse' what was the cause of the name change?
Samo: Well actually the RGC is completely different project. It was a homestudio fun, which Samo wanted to make into a live band. However after the bandmates were found we've have realised that we want to make more serious music. Thank god...

5.What is the meaning and inspiration behind the name 'Besna'?
Samo: Inspiration came from the slovak romantism ballad Margita a Besná, written by Ján Botto. Originally there wasn't really any lyrical connection to it, but presently it has even inspired one of the upcoming songs. Regardless of this ballad, Besna just sound great to us. It means "mad".

6.Has the band done any live shows or open to the idea?
Pinto: So far we have played more than 20 show across Slovakia, mostly in our hometown of Bratislava. We've also played on a national radio earlier this year and on the online version of Pohoda festival just a couple weeks ago. That was a really cool concept by the way - with COVID-19 restrictions no audience was allowed, so each band played at a unique venue setup at different places around an empty airport - the recordings are still online so we can only recommend to watch a couple shows. (Here is ours https://youtu.be/vCshylgMu7s )

7.Recently you where a part of a split with 'Abyss', what are your thoughts on the other band that had participated on the recording?
Samo: They are nice people in the first place, which we have got to know during their tour on our joint gig in Bratislava in April 2019. Moreover we are really enjoying their music, so after they have've asked us for collaboration, there was a definite Yes!

8.On a worldwide level how has the reaction been to your music by fans of post black metal?
Samo: You tell me, haha. We are so far aiming mostly the slovak audience, and I guess based on the reactions from people, there are some fans that like our music. In January 2020 we got the opportunity to play live and speak in the only slovak heavymetal radio show Headbanger_FM. That was kinda motivational. Anyway, thanks everyone for support!

9.When can we expect a full length and also where do you see the band heading into musically during the future?
Samo: We are now working on the material for full length album. Our goal is to record it this year. So maybe at the turn of years. Musically we will stay in similar tunes we had released so far, though maybe leaning in a more post/prog direction this time. But after that, who knows...

10.What are some of the bands or musical styles that have had an influence on your music and also what are you listening to nowadays?
Pinto: I personally feel the songs on the split were most influenced by having Harakiri for the Sky and Ne Obliviscaris on repeat at the time of writing. There are pieces of that I can hear coming through here and there, though the result is definitely much rawer (as in - less technically proficient :-) ) - more in line with the route our sound was already on.

11.What are some of your non musical interest
Samo: Depends. Every band member likes something else even in musical interests. Maybe sport climbing is something that at least three of us enjoy. For example Samo volunteers in community bicycle workshop Bike Kitchen Bratislava, Timo is in to LARP, Gabo likes video games and Pinto loves his job - IT developer and craft beer as well.

12.Before we wrap up this interview, do you have any final words or thoughts?
Pinto&Samo: Check out the Abyss/Besna split, out on September 12th 2020 and be nice!

Posted by OccultBlackMetal at 10:46 PM