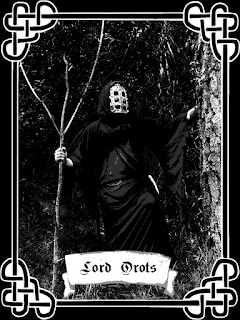 1.For those that have never heard of you before,can you tell us a little bit about the musical project? Lord Orots is a musical project that tells the story of its own universe combining Dungeon Synth, Dark Ambient and Atmospheric Black Metal.

2.So far this year you have put out 5 releases, musically how do they differ from each other? The first releases were mostly dark ambient and dungeon synth. This new album I'm releasing with Onism is more atmospheric black metal but it still has that characteristic dungeon synth touch.

3.You refer to your music as being 'fantasy ambient', can you tell us a little bit more about this term? I like to define it that way because I don't want Lord Orots to have just one specific genre. It's a project that's constantly evolving but of course it's always tied to this fantasy world I try to describe. So I think "fantasy ambient" is a good way to describe the music of Lord Orots.

4.The earlier releases where more dungeon synth while the new album was more in a black metal style, what was the decision behind going into this musical direction? As I said, this project is constantly evolving and I don't want to limit my project to the "rules" of one specific style. Also, the concept of this album has a direct relation with this decision. The thing is that in the universe of Lord Orots there are two "cycles". The album changes the style of the earlier releases because in this one we are in another cycle. In future works I will evolve this idea more and more.

5. There also seems to be a fantasy concept that goes with the name 'Lord Orots', can you tell us a little bit more about? Orots is a mythological name of one of our pagan basque gods. The god of thunder. And the "Lord" title is there for two reasons: First of all it matches with the epic fantasy idea that I try to transmit and second, because it's a tribute to the black metal band Lord Belial, one of the bands I started listening to when I got into Black Metal.

6.Can you tell us a little bit more about the artwork that is presented on the new album cover? The artwork shows Lord Orots resting in his throne. He is going to sleep for 10,000 years because the new cycle starts. The cycle where he is in the realm of his dreams and where he must fight against the Black Abyss. All these concepts I will try to develop in the future.

7.With this project you record everything by yourself, are you open to working with other musicians or do you prefer to work solo? I think working solo is better than working with other artists because I don't have to discuss ideas with anyone. I have no limits and I can do what I really want to do. This doesn't mean that I don´t talk with other musicians. A lot of them have helped me by giving me advice. Maybe in the future I will work with other people if necessary.

8.You have put out 5 releases this year, do you spend a great amount of time writing and creating music? The "strategy" I have followed is that these first months of existence I have made a lot of music. A lot of releases to get known. Now that people in the Dungeon Synth scene know me, I will put quality over quantity. With the first releases I spent at most like a couple of months. Sometimes in just one month I could do an EP. Now I want to spend months and months to make releases that are not just good but they are memorable. Just like this new album.

9.The new album is coming out on 'Onism Productions', how did you get in contact with this label? I randomly clicked on their first release on Bandcamp. It got my attention so I then visited their webpage. I was impressed by how professional it looked. It was minimalistic but very serious and professional. Then I saw that they could release music on CD, something that I wanted to do with this specifical album so I contacted them. They have just started but I'm sure that if they keep up with the good work and they put quality over quantity they will sign great bands in the future, bands a lot better than Lord Orots.

10.On a worldwide level how has the reaction been to your music by fans of black metal and dungeon synth? I think that people from the Dungeon Synth scene respect me and like my work. That's for me very important, to be recognized by other DS artists motivates me a lot because I don't consider myself an artist or musician, those are big words for me. When I started this project back in October I couldn't even imagine that in a few months I would be releasing physical stuff in the U.S. and Europe. I think that for the little time Lord Orots existed I have already achieved a lot of things. The Black Metal scene is different. There's people that like both genres, and there's people that like just one. I just know about the people that reach to me saying that they like my music. But I don't know what people think in general. In the Black metal scene of the Basque Country at least I think that people like what I do.

11.Where do you see yourself heading into as a musician during the future? I have no idea what is going to happen. I think that Lord Orots is and will be my main project and I want to see how it evolves in 9 years if it already has evolved in 9 months this much. For myself, I don´t know either. Maybe it would be cool if I end up playing in a metal band with other musicians. But right now I'm focused on Lord Orots.

12.What are some of the bands or musical styles that have had an influence on your music and also what are you listening to nowadays? The bands that influence my music are many and some of them are very different from each other. I think my musical taste and influences can be grouped in two groups: First we have black metal like: Burzum, Summoning, Immortal, Pest, Alcest, Hellhammer, Lord Belial, Woods of Desolation, Drudkh, Nargaroth, Ulver, Enslaved, Dissection, Windir, Agalloch...and many others. As you can see, I listen to very different black metal bands but all of them have a unique atmosphere. Then we have Dungeon Synth with bands like: Fen Walker, Mortiis, Depressive Silence, Elffor, Old Sorcery, Moth Tower, Fief, Thangorodrim, Lord Lovidicus, Old Tower...The list goes on and on. The music I am listening to depends on the season. Now in summer I listen to death metal and grindcore, my body asks me to listen to it: Wormrot, Asphyx, Nails, Insect Warfare, Mutilated Judge...Then in winter I will get back to black metal.

13.Does Occultism play any role in your music? Well my music is directly related to the fantasy of the world I try to describe but I don't think that's related to occultism or at least that was not the intention.