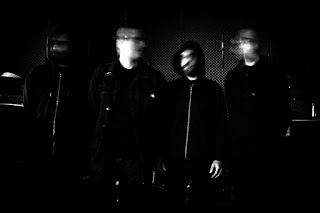 1.For those that have never heard of you before, can you tell us a little bit about the band?
The idea was born after a casual discussion about music between S. and P. (on guitars) a bit more than a year ago. We quickly discovered there was a very good chemistry so soon after that A. on bass and T. on drums joined. Once the band was complete, the sound of Förfallet started forming in the rehearsals.

2.In May you had released your first album, can you tell us a little bit more about the musical style you went for on the recording?
All members have played (or are still playing) in different bands. One thing we had in common was that we wanted to try something new, something we had not previously done. We also wanted to play some form of black metal. Those two factors combined resulted in this album.

3.What are some of the lyrical topics and subjects you have explored so far with the music?
Grief, despair, loss of belief and the sheer hopelessness one can feel about the cruelty of mankind.

4.What is the meaning and inspiration behind the name 'Forfallet'?
For us, ‘Förfallet’ is about the single ongoing and unstoppable process of decay in society and in ourselves as individuals. We all carry a destructive force within that affects everything around us, even if we don’t want to admit it. And the byproduct of that is the feeling of helplessness once one realizes that one cannot put an end to it.

5.Can you tell us a little bit more about the artwork that is presented on the album cover?
It is an oil painting inspired by the soundscapes and emotions invoked by the music, the rest is up to the viewer to interpret. It was painted by P. (guitars, vocals) after the recording of the album.

6.Has the band had any opportunities to do any live shows or is this strictly a studio project?
We have not played live yet, but it is something we want to do in the future. Because of the situation now with the pandemic there are no specific plans, but we definitely don’t consider Förfallet to be a studio project. It is important for us to try to express and convey our emotions in front of an audience as well.

7.Currently you are unsigned, are you looking for a label or have received any interest?
We looked for a label briefly, but that is not what is important for us right now, since this is our first release. We want our music to be heard and to get a reaction from the audience; we are curious to see how others relate to our music and what it means to them.

8.On a worldwide level how has the reaction been to your music by fans of black metal?
When we released our album on Bandcamp it did not take long before people started supporting it. We’ve heard good words from a few reviews that are already out and there’s a couple of mentions in some bigger music sites/blogs. So we feel that the reaction has been good so far!

9.Where do you see the band heading into musically during the future?
We are already working on further exploring our take on the genre and to refine how we portray our emotions through sound.

10.What are some of the bands or musical styles that have had an influence on your music and also what are you listening to nowadays?
We all listen to and have been influenced by different music styles.


11.Before we wrap up this interview, do you have any final words or thoughts?
Thank you for your review and the opportunity to reach more people with this interview. We are currently working on our next album which we hope will be out in about a year.

Bandcamp
Posted by OccultBlackMetal at 8:58 PM