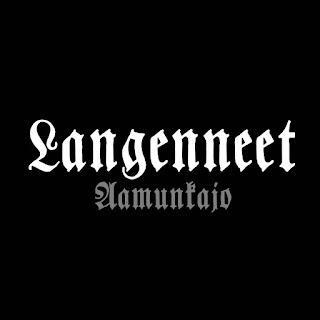 1.For those that have never heard of you before, can you tell us a little bit about the band?
Langenneet is an occult metal act, who dedicate its work entirely to studying the “fallen angels” mythos and symbolism surrounding it.

2.So far you have released a demo, can you tell us a little bit more about the musical style you went for on the recording?
Aamunkajo demo consist of two songs. At this stage, they present the sound of Langenneet in a perfect way. More elements will be presented in the future, but at the moment it is a perfect demonstration of what Langenneet is about. Musically, it is dark and metal, with both aggression and melody included.

3.A lot of your lyrics cover occultism themes, can you tell us a little bit more about your interest in the dark arts?
Lyrically Langenneet focuses on the fallen ones mythos & symbolism. Naturally other elements of occult knowledge are very much present in the lyrics as well. This is about personal view - getting the point; not just about taking it all literally. I am personally very much interested in hermeticism and spiritual alchemy.

4.What is the meaning and inspiration behind the name 'Langenneet'?
Langenneet means fallen ones in Finnish. Fallen ones are a wide concept that has written roots in Sumer, while abrahamic myths of the fallen angels are probably the most widely known. Most of the readers of this media are probably interested in the satanic development of the theme.

5.Has the band done any live shows or is this strictly a studio project?
At this moment Langenneet only writes and records. Live shows might be possible in the distant future, but right now there are no plans for that.

6.So far very little is known about the band except for the bandcamp page, is that intentional or do you plan on expanding your presence in the future?
Right now it feels that Bandcamp is enough. Both of the demo songs are also on YouTube. Langenneet has no desire for social media presence, or other extensive social presence. Everything is based on people’s will to search and study things that might lead them to discover Langenneet. Therefore Langenneet remains anonymous (even to my closest friends), at least for now.

7.Currently the band is unsigned, are you looking for a label or have received any interest?
Langenneet haven’t communicated much with record labels yet, but I believe that we will get to that later.

8.On a worldwide level how has the reaction been to your music by fans of black metal?
Aamunkajo demo was released only a week ago. Therefore only very few individuals have discovered Langenneet so far. As a matter of fact, your review is one of the few reactions so far.

9.Do any of the band members have any experience playing in other bands or musical projects?
At the moment Langenneet consists only of one person. I have been active in making music many times over in the past.

10.When can we expect a full length and also where do you see the band heading into musically during the future?
The are plans for several concept albums. Both of the Aamunkajo demo songs will most likely be featured on the first album. Therefore the demo version are now available for free download at: https://langenneet.bandcamp.com.

11.What are some of the bands or musical styles that have had an influence on your music and also what are you listening to nowadays?
I am interested in dark music in general. On the first demo, I sensed the influence of Impaled Nazarene (with Kimmo Luttinen) and Root (with Blackie). This was entirely coincidental, not conscious at all.

12.Before we wrap up this interview, do you have any final words or thoughts?
Thank you for the interview. As a long time underground follower, I appreciate it a lot that there are zines and medias who delve into new and unknown music. The whole Langenneet philosophy and concept is based on something similar.

Posted by OccultBlackMetal at 8:39 PM