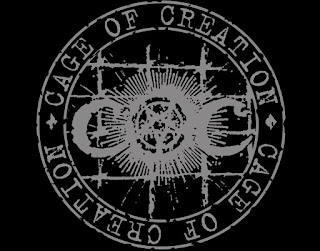 1.Can you give us an update on what has been going on with the band since the recording and release of the new album?
Right now we're working on next releases:

3.Most of the band members where at one time a part of 'Rotting Heaven' a band that sounds completely different from the stuff you are doing right now, what was the decision behind breaking up your older group?

4.What are some of the lyrical topics and subjects the band explores with the newer music and also how would you describe your progress as songwriters over the years?

Most lyrics could be described as an artistic expression of mystical visions / dreams, which we experienced through the prism of altered state of consciousness.
Progress as songwriters? Not sure about it, more or less we're exploring the same topics under different corners.

5.What is the meaning and inspiration behind the name 'Cage Of Creation'?
Existence is a prison (the "cage") for human soul / consciousness.

6.Can you tell us a little bit more about the artwork that is presented on the new album cover?
Ra Bs:
The main idea of this artwork was to combine the dance of death as a starting point in the concept of the "Into Nowhere II" album with simple forms of petrogliphs which, in turn, could also become sort of a starting point for understanding of the musical form of the album; with all of its shamanic atmosphere and the darkness of the hostile, dense forest. One, already a dried corpse, is still summoningly beating the ritual tambourine, while the other is still craving for narcotic visions. There's no life anymore but the supernatural passion has remained and become the mad dance on the other side of existence.

First recordings were inspired by both demos of Niding from Sweden, early material of Urfaust, Lönndom, our neighbors by label - duszę wypuścił, and some others.
Later recordings have more variety and external influences are in general less obvious. Probably the most obvious influence on our new album would be some Grudom vibes on "Into Nowhere XI"
https://www.youtube.com/watch?v=9ngP9qrtq18

What we're listening during these days:

12.Does Shamanism and Occultism play any role in your music?
There is no connection to any specific tradition, we're just inspired by the unknown, the hidden. Cryptic dreams, visions, strange thoughts, atmospheric places, other art - lots of things might have right impact.

13.Before we wrap up this interview, do you have any final words or thoughts?
Thanks for reading!

Posted by OccultBlackMetal at 3:01 PM