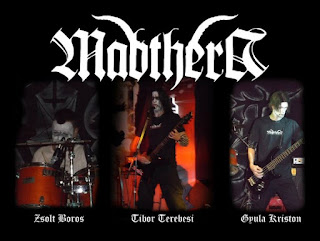 1.For those that have never heard of you before, can you tell us a little bit about the band?
1. I'm Tibor Terebesi from Ózd, founder of MabtherA one-man project, which started at 2009. (Ózd is a little town in Eastern-Hungary.) In the beginning I interested in electronic ambient songs. MabtherA was introduced at 2012 in the Iron and Blood CD which was issued by the Hungaryan Records. It contains a song wich was a 2 folksong-black metal transcription and called Hidegen fújnak a szelek a csitári hegyek alatt. (Cold winds at the hills of Csitar.)
At April of 2013 the first demo was born which was called "On the Infernal Path". It was issued in 2015 in a joint release of DarkEastProduction, Symbol of Domination and Metal Throne Productions.
In this summer the second MabtherA CD "The Demons Among Us" was finished. It is currently issued by me only.

2.How would you describe your musical sound?
2. I always made effort for different sounding in every CD but it is not always obtainable in my home studio. I like articulate but not crystal-clear sounding.

3.The band has been around since 2009 but so has only recorded 2 albums, can you tell us a little bit more about the gap between releases?
3. It took long time to find the sounding which is ideal for me. I like the experimentation and it takes time when I write songs and music because I let my mind and imagination creates music. After the warm response of On the Infernal Path (2013) I tried to form a band (2014) and my effort was successful but it took long time and much of energy. This year MabtherA is one-man band again but I have more time to create a new CD.

4.The lyrics cover a lot of satanic, dark and occult themes, can you tell us a little bit more about your interest in these topics?
4. I interested in everything which connected to these things. I simply interested in these themes. The more I read about it the more question I have about it and I think it is the good way.

5.What is the meaning and inspiration behind the name 'Mabthera'?
5. I had cancer in 2005. At that time I treated with operation and chemotherapy. Mabthera is part of chemotherapy. I had half year of this treating and I meet many times with this word. This half year changed my mind and my soul. I decided that I will write songs and music and I will use this word as my project's name.

7.Do you have any touring or show plans once the new album is released?
7. Currently we do not assume performances. The other 2 member of the band have family too, and they have to work and we don't have enough time to practice. But I still write songs and I hope we can play music together in a performance one time in the future because we enjoy live performances.

8.On a worldwide level how has the feedback been to your music by fans of black metal?
8. International feedback is better than domestical. Just look at who issued our demo... We thanks a lot for DarkEastProduction, Symbol of Domination and Metal Throne Productions. I think in Hungary there is no enough audience for this style of music.

9.Are any of the band members also involved with any other bands or musical projects these days?
9. I think they don't participate in other bands but I think our drummer Zsolt and bass-guitarist Gyula are good musicians and they could play in other bands too. I enjoyed to play with them very much! I am a member of the Velm band too.

10.Recently you have recorded a new album, what can fans expect musically once it is released?
10. Title of the new CD is "The Demons Among Us". It was produced only by me just as "On the Infernal Path". CD contains 9 tracks: Intro/Waves Of Oblivion/A hegy nem ereszt/The Demons Among Us/Total Earth Offensive/Occult/Outro and two transcriptions: Bathory-Call from the Grave and Bethlehem Schatten Aus der Alexander Welt. Tamás Deák sings the Waves Of Oblivion who is member of the Frost band which originates from Kazincbarcika. I think musically it is better because it is darker than the demo.

11.What are some of the bands or musical styles that have had an influence on your music and also what are you listening to nowadays?
11. Every famous black metal bands affected our music but currently I usually don't listen to music much because I write music.

12.Before we wrap up this interview, do you have any final words or thoughts?
12. Thank for the interview very much! Best wishes for you and the readers! Hail black metal!