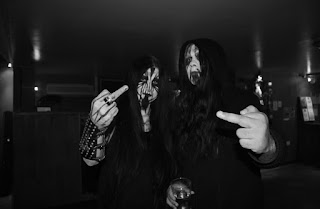 ReffuS: ReffuS was created through Repktkor and Morth's hateful passion for their fellow human race, a cancerous blight upon this earth. Born into the cesspit to rot amongst the bile of society and all its constraints, a vile species born into an unknown cage, a sheep who stands on those among its flock and deems to be better than the others, forgetting. We are all the same to the dirt we are buried in.

Repktkor: I would have to say the musical sound that is presented on the ep, has come from my hatefulness towards humanity and all of life. It is a collaboration from two individuals who are so similar on views of life but yet so different. Furthermore I would say it is a combination of depressive and raw black metal.

Morth: Musical sound is derived and inspired from living with depression and anxiety, feeling detached from the world around us. Black metal being the strongest influence on the sound, from first wave of black metal to many of its sub genres that are present nowadays.

ReffuS: Lyrical topics, if you want to call it that is misanthropy. We want this world to die with all of its inhabitants with it, the ultimate goal would be for humankind to do just that. Music is a powerful force.

4.I know that the band name is 'suffer' spelled backwards, how does this name fit in with the musical style that you play?

Repktkor: I hate all life, I want it to suffer and die. The music is hateful yet depressive as one. You will all suffer or are already suffering, no matter how blind to it you are. You are all a slave to life.

Morth: In this world we are born and expected to follow what generations have done before. Depending on where you're placed on this planet, there is always constraints on what you can do and how you can express yourself, whether it is cultural, social, family ect. What I always noticed in that no matter where you look, someone is suffering. Through life I had the suffers of life placed on my shoulders and expressing it through music was a way to vent it and spread a message/state of mind. What people interpret that mindset/message to be is for them to decide or pick up on. If you like it great, if you don't I don't care. Causes you to want a hug, great. Feel self destructive, go for it.

5.Currently there are only 2 members in the band, are you planning on expanding the line up in the future?

ReffuS: Yes the line up will expand in future for live performances and recordings.

6.The band has been around only since November but has already got music released and have played live, do you put a great amount of time and effort into the music?

Repktkor: I always put a lot of time and effort into the music I create, it is an extension of my soul.

Morth: I will always find time for music. I have loved the music since I was young. As I progressed through life, my musical taste matured to what I would listen to now. The band and also the album was put together rather fast, but was a combination of ideas that I have wrote through my life and with my different influences. The ep was released on time for a gig, but we both had wanted to start a band from before the formation of ReffuS and the gig. Only when the supporting bands of the gig pulled out, we decided to form and get a setlist together for the short deadline. In that time there was many hours recording the different instruments and mixing the songs into the ep.

ReffuS: We have only had the one gig to date, and considering we didn't get to do a rehearsal together at all or sound check for ReffuS, we think our stage performance was good. All our work together had be previously online contact. So the gig was well performed considering.

ReffuS: At the moment no new dates are planned for live performances. But there will be gigs for 2016.

9.When can we expect a full length album and also where do you see the band heading into musically during the future?

Repktkor: You can expect a full length album in 2016 so you humanity can kill themselves while listening to it. It will remain hateful and depressive. Although you never know what might be drawn out from our dead hearts.

Morth: Hopefully in early-mid 2016 a release of a full album will be aimed for. May change. Progress on that has begun, song and sound ideas coming together.

10.On a worldwide level how has the feedback been to your music by fans of black metal?

Reffus: We are still very new. Although for the feedback we have had so far has been good, although we we do not care for the opinions of others.

Morth: For me I grew up listening through music of my father's. It would have been bands like Rainbow and Led Zeppelin ect. As my taste for music grew and I progressed through life, I found myself drawn to the darker and heavier and more extreme genres of rock and metal. I would say bands like Dark Fortress and Shining had the melodic smoothness that grasped me but still the harsh side of black metal, and obviously raw black metal would have its influence strongly on the music. There are too many bands to truly name a direct influence. Music has to have a sense of atmosphere and depth.

Repktkor: Kill yourselves. Don't be a slave to life and end your miserable existence.

Morth: Nobody wants to feel shit, but in this life it's a common mental state for many within this modern-day world/society. I find that the only limitations and barriers in life should be put there yourself. Only by choosing who you are among this shit world can you rise above it. We are all equal in the certainty of death, keep that in mind for the time you have left on this wretched world.

Posted by OccultBlackMetal at 10:18 AM