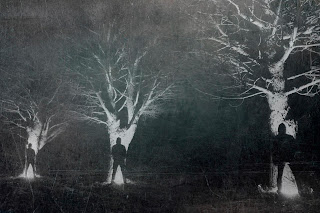 
.Clement : Hi !  Hyrgal is a Black metal band that i've created in 2007 when i was living in Bordeaux (FR), At first it was meant to be a personal project butvwith the help of Quentin Aberne (Carcolh, Sweven, ex-Sun Preachers, ex-Marble Chariot) on bass and Thibault Meunier (ex-Otargos) behind the drums,we released our first Demo on a split album shared with Kairn (acoustic project of the former Otargos guitarist, Julien Savy).
We were soon to be opening for live performances of bands such as Wolves in the Throne Room, Year of No Light, Otargos...
In 2016, I've decided to relaunch the project with a new drummer with whom i got closer since 2012, Emmanuel Zuccaro (Oorthian, ex-Karne, ex-Sulphureign) and still Quentin on bass.  Emmanuel moved from the north of France to the south in order to work with me and have some other standards in his life.
The full length "Serpentine" was then recorded DIY at the Southern Ritual Studio during December 2016 and January 2017, and the mix and mastering was performed by Déhà at the HH studio during May 2017.


2.How would you describe the musical sound that is presented on the recordings?

C : It's my personal vision of the black metal. Something natural, primitive, dedicated to the roots and against the modern world, codes, and new social behaviors.

3.The band was broken up for 6 years, what was the cause of the split and also the decision to reform?
C : I've decided to split the band because i was having some troubles with the drummer at this time. For me, it's really important to have a perfect synergy between bandvmates and I can't work otherwise !! Hyrgal is far too much important for me to let parasites interfere with the band !!!
At the same time, I've joined Svart Crown as full time guitarist. I've moved from Bordeaux and fully dedicated myself to Svart Crown (new releases, gigs, tours...).
It took me a lot of time and focus, so Hyrgal was therefore put on hold.
This is my personal way of expressing myself, it is far too much important and valuable to me, it's not just a simple side-project : it does need time and dedication.
After i've decided to leave Svart Crown, I realized that it was the time for me to get Hyrgal back on tracks, and then i've started working on the composition of the new album !!

C. As I said earlier, it's a total dedication to the roots, against the modern world, or at the very least what humans do wrong in my point of view !!!
I'm merging my personal anger of this world with the admiration of my birth place, the French alps and its folklore.


5.What is the meaning and inspiration behind the name 'Hyrgal'?
C. Hyrgal comes from the merging of two runes : Tyr and Hagal.
At the beginning I was really in touch with the scandinavian folklore and spirituality.
The runes representing something old and true, and with a massive spiritual meaning.
So it was something appropriate for my project at this time !!


6.What are some of the best shows that the band has played over the years and also how would you describe your stage performance?
C: Hyrgal didn't perform a lot of gigs, so for us, each one was pretty intense and emotionally important !
But I think the show with Year of no light and Wolves in the throne room was the most important and the most intense.
Our last show in Bordeaux at the Interceptor Fest was important too, as it sealed something strong between us and it was the very first gig with the new line-up.

C: Not actually. We have some plans for playing in our country... We will see what we can do in the future and after the album releases.  The most important thing for Hyrgal is composing, recording and be focused on our artistic expression, not necessarily playing live. We just want to play shows with bands, promoters, venues or concepts we are sensible to : we're more into quality than quantity.


8.On a worldwide level how has the feedback been to your music by fans of black metal?
C. It's a little early to have a proper feedback, yet the first comments are really encouraging and positive... We gave the record to some brothers in the scene and people that we're in touch with.
Their reception is pretty good and they give us lots of support.

9.What is going on with some of the other bands or musical projects these days that some of the band members are a part of?
C. It's quite complicated, lots of things are happening. We work on many projects actually.
The bassist, Quentin is still in Bordeaux, we work with the distance cause i've never found a better bass player for Hyrgal, this man is insane. He has his own projects, a Heavy/doom band call Carcolh
and he also works with a Psyché / rock band call Sweven (you should check, these are really good bands).
The drummer, who lives in my town now, works with me on many common projects; he's a fucking genius and talented man, he is a multi-instrumentalist, and, since 4 years, is my right arms in my musical experience.
He's playing guitars in my other band Oorthian, and he's working on a soon-to-be-released project called Verfallen (kind of extreme black metal) where he's playing all the instruments.
For myself, after leaving SC, I've passed an audition for a doom band called Pillars as singer, really challenging... I've recorded the first EP, and after many live performances, I'm entering the studio next week to record our first album...
At the same time, I was working on the Hyrgal album and i've decided to form another Doom band call Oorthian with Emmanuel.
I'm also working on some other projects that i prefer to keep secret for the moment....

C: The same that we are actually, playing and recording something honest, personal and dedicated to our spiritual path.
Always black metal for sure !!!  I listen to a lot of different kind of music, so I think it will have some influence on my way of composing, but it will be the same roots.

11.What are some of the bands or musical styles that have had an influence on your music and also what are you listening to nowadays?
C. I'm listening to a lot of different kind of music, from ambient to extreme metal, so it's a wide and eclectic panel of inspirations and it's difficult to list them all...
I find my influence in everything around me; the music is still the main medium but i find some inspiration into nature, the pathetic observation of our evolution and existence, the folklore of my country, the old legacies. Everything which is a vessel for emotions.
For example, I'm really into Corrupted, Bolzer, Furia, Mizmor, lots of black metal, doom stuff and various things in extreme metal, and at the same time I listen to Bohren & der Club of Gore, Tim Hecker, Sean Price, Marin Marais...


12,How would you describe your views on Paganism?

C. I think all people into it have their own views and explanations of what Paganism truly is.
And many people do not agree with each other... So it's completely different from a person to another, from my point of view.
For me, paganism is a return to the roots, a respect and transmission of our past and history.
A communion with the natural environment, and a spiritual path through this new era, guided by many forces and radiating from everything around us.
I thinks it's definitely against monotheism. It's also something really personal, as faith itself, the very quest to spiritual elevation...
It's a path toward truth and knowledge.


13.Before we wrap up this interview, do you have any final words or thoughts?
C. Thank you for this interview and for permitting us to describe our work and music.


Posted by OccultBlackMetal at 9:21 PM