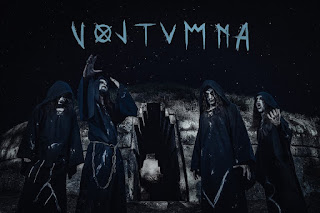 1.Can you give us an update on what has been going on with the band since the recording and release of the new album?
Hi OccultBlackMetalZine, the band is finally releasing the new album with the greek label Sleaszy Rider, very excited for our most extreme release. The band is actually working on the promotion of this new work, in particular with the booking of new headlining shows around Europe for next year, a big tour TBA and some great festivals already announced like Stonehenge in Netherlands with legenday bands like Suffocation and Pestilence.

2.Recently you have released a new album, how would you describe the musical sound that is presented on the recording and also how does it differ from the stuff you have released in the past?
Dodecapoli is absolutely our most extreme experience. During the past years we have increased our experience and finally we knew what to do for a great third full-length; we have worked a lot on the drum fillers, faster and groovy, and introduced some ancient instruments of the Italic tradition in almost all the songs in the collaboration with Tursen, to make everything in our personal style, a pagan mixture of Black and Death metal.

3.Both the band name and sing lyrics come from Etruscan Paganism, can you tell us a little bit more about your interest in this topic?
One of the former, Haruspex, is graduated in the university of Rome in archeology and ancient civilization and also the other members of the bands are all from the ancient Etruscan lands, so since the begginning our interest was focused on this misterious and “dark” civilization. Very close to our town there is the biggest Necropoli of Europe, we were fascinated about this culture, also to understand what happened in the history before and after the Roman Empire and Christianity.

4.What are some of the best shows that the band has played over the years and also how would you describe your stage performance?
The first one was probably our show in Johannesburg, South Africa, just before our godfathers Behemoth. It was one of the greatest emotion to see Nergal watching our show, and also all the crowd knew our songs, we have a lot of fans (Etruscans) there and we want to come back. Our last US and China tours were amazing too and Europe our greatest experiences were in these years Festival of course, in Germany, Austria etc.
Our live performance is full of emotions for us and also for the people, different styles mixed to make a new kind of ritual, something lost in the history after the romans.

5.What are some of your future touring plans?
We have for 2018 a great tour TBA, as said before a lot of Euro metal festival like the Stonehenge and some headlining shows from Berlin to Prague, from Milan to London etc. All to be announced very soon

6.The new album was released on 'Sleaszy Rider Records', are you happy with the support that they have given you so far?
Yes finally we have found a good label to work with, we think that from this collaboration will  happen great things in the near future for sure.

7.A couple of years back you had done a version of Venom's "Black Metal", what was the decision behind doing your own version of this song?
As you know we are not completely a Black metal, in fact we mix Black and Death like most of the polish metal bands do, but Venom was probably the first band we loved in the past years, so for us was a pleasure to do a tribute to them, hope that our Etruscans from all over the world have enjoyed our version of this masterpiece.

8.On a worldwide level how has the feedback been to your music by fans of black and death metal?
Almost in all the countries very good, we still have to grow up as band but till now we can consider us as one of the new reality of the genre, we are trying to do our best. Music is our life.

9.What is going on with some of the other bands or musical projects these days that some of the band members are apart of?
We are all focused on the Voltumna project for now, this is what we can say.

10.Where do you see the band heading into musically during the future?
Our divination rites will explain our way. No plan for now.

11.What are some of the bands or musical styles that have had an influence on your newer music and also what are you listening to nowadays?
Something of the new atmospheric way of Black Metal like the mighty MGLA and still the new efforts of our god fathers: Rotting Christ, Behemoth, Hate, Septcflesh and many others.
We listened a lot of different music so this why we can create a personal style during our composition, or better we try to do this as well.

12.Before we wrap up this nterview, do you have any final words or thoughts?
A great thank you to all our Etruscans worldwide for all the support we receive year by year, we know that our worshipper will be satisfied with new album and new adepts will join the cult of VOLTUMNA.

Posted by OccultBlackMetal at 6:45 PM