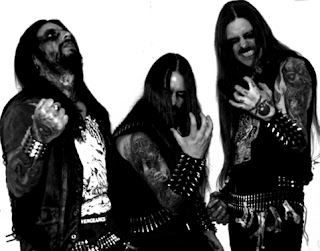 We'll we're death/black metal band that started as a homage to the early extreme metal scene we all love.
We aim to keep it simple and brutal with violent and short songs.

2.So far you have released 2 ep's, how would you describe the musical sound that is presented on both of the recordings and also how do they differ from each other?

The sound in pounding evil madness and total death. Posesión is more intense and a bit faster and compared to our first EP "Sacrilegio". Still the same extreme old filthy black death metal though.
We feel that "Posesión" is a bit more representative for what we try to achive with Corpsehammer than "Sacrilegio", but we still like that one.

Extreme music with the right amount of death and darkness feels like dynamite to us.
To give an idea of what the lyrical topics are about; for example with Beso Infame the concept is about a covenant with the devil, devil worshipping and the female role in the occult. Beso Infame stands for Osculum infame. Another idea of the lyrics is the song Pulso de Saturno which relates to the conspiracy between the crowned king Saturn and the fire born Jupiter and their death pulse towards us.

4.What is the meaning and inspiration behind the name 'Corpsehammer'?

We wanted a name that suits the music. Hammer is of course a homage to Hellhammer and that era of extreme metal. And since our music and lyrics deals with the visions of darkness and death we chose "Corpse", and also to illustrate that we a have a bit of a death metal approach to our old school worship.


5.Some band members live in Chile while another one lives in Sweden, how does this work when it comes to recording music?

Actually we all live in Sweden. Minight Horror, the vocalist is from Chile but live in Sweden nowdays. So this does not affect the recording or writing process.

6.Are there any plans for any live shows planned for the future?

Our goal is to play live but we don't have any shows planned at the moment.

7.So far the band has worked with 'Morbid Skull Records' and 'Bifrost Records' are you happy with the support these labels have given you so far?

We're really pleased with their support, both labels have been easy to work with and kept everything they promised.
And Morbid Skull has really made a great work promoting the EP. We're grateful for that!


8.On a worldwide level how has the feedback been to your music by fans of black and death metal?

It been good. Of course its just a cassette EP realeased in a few hundred copies, but we recieved a bunch of great reviews and many seems to like it so that feels really good.


9.When can we expect a full length album and also where do you see the band heading into musically during the future?

The plan with Corpsehammer is to keep releasing EP's in analog formats (tapes and vinyls). We have no plans to make an album at the moment, though you never know what happens in the future.
However we might release an EP collection on CD or something.

We have written a few new songs that will be released as an EP later on, and this have an even more old-school approach to them but still in the Corspehammer vein though and still short brutal and effective songs...


11.Does Occultism or Satanism play any role in your music?

Maybe not in the in the music, that comes from our love for metal, but in the lyrics. They deal with darkness, visions of death and occult themes.

Thank's for the support!
The Corspehammer horror has just begun!

https://www.facebook.com/corpsehammer
Posted by OccultBlackMetal at 6:16 PM