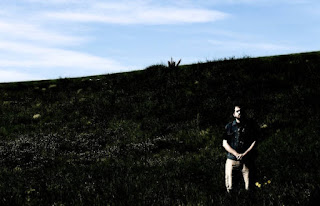 The project started in 2016 as a creative outlet in response to having had my second child and essentially being stuck at home every day.  I hadn't played guitar in some time so I dug it out, started playing again, and taught myself how to program drums. My first EP Pater Vita came out last August, and a couple months later in October 2016 I put out a split EP with Necrolytic Goat Converter.

Musically, the two main reference points on the album are black and doom metal, however to fit with the story I wanted to tell, I incorporated elements of folk, noise and post-black metal in some sections as well.

3.The lyrics on the new album have a concept story to them, can you tell us a little bit more about the songwriting?

The concept of the album is the historical account of my great grandparents' escape from post-Civil War Russia in the 1920s and the challenges they faced upon moving to Canada. I broke down the story into sections, and then spent time figuring out how I wanted each of those sections to be represented musically. In that sense, the concept drove the songwriting.

4.What is the meaning and inspiration behind the name 'Domestikwom'?

The name Domestikwom is essentially a pun based off of my last name Petkau, with "kwom" being an old English word for "cow".

5.Currently the project is mostly solo are you open to working with a full band or doing live shows?

While I would relish the opportunity to play with other musicians in a live setting, the fact that I started this because I was stuck in my basement looking after kids essentially prevents me from trying to put together a full band at this time.

6.On the new album you had a great amount of session musicians, can you tell us a little bit more about who they are and also their contributions to the recordings?

Initially I had only planned on having Erik Highter from Monophonic Shooting Spree collaborate on a noise track that would split the album into its two halves. Eventually though, as time went on, I decided to try and get as many of my talented musician friends and family to contribute as it made sense. My best friend Adam Ayer is a talented singer/songwriter and so he sang and played acoustic on the first track. Chris Voss from Necrolytic Goat Converter laid down a sweet black metal guitar solo on the third track. Jeremy Hunt from the noise rock band Qoheleth played some noisy leads on track four. Josh Thieler from Slaves BC did the vocals on the chorus of track seven. And on the last track, there were two additional musicians. My mom Carol Petkau actually sang the vocals for that song, and Andy Helgeton from the instrumental prog band The Wolf and The Epitaph closed out the album with the album's second guitar solo. I have been surrounded by such talented musicians my whole life and am grateful to have their voices shape what this album is.

I suppose that I wouldn't turn away any interest if it came up, but at this time I'll probably continue self-releasing until it doesn't make sense.

I'd say that with this project still getting started, the feedback has been appropriately small but enthusiastic so far. I'm hoping I can start building an audience with this album.

I'm still coming down from the highs of finishing A Peace That Destroys but lately I've been thinking more about noise and electronic integration in the extreme metal framework, stuff like Violet Cold or Full of Hell. I think when I start writing again, that's what I'd like to experiment with.

For this album I was inspired by Canadian band Thrawsunblat, whose integration of maritime folk into their black metal and focus on nature allowed me to picture how I could translate the life story of a farmer into music that I would want to make. My narrative inspiration primarily came from the Twilight Fauna album Fire of the Spirit, which attempted to tell the story of a specific group of religious people as honestly and generously as possible, even when the artist disagrees with the subjects' beliefs. There was definitely an opportunity to try and make my families' story more sensational, but it would not have been honest.

As for what I'm listening to recently, it's been mostly bands like Panopticon, Dawn Ray'd, Couch Slut, and a band from here in Calgary called Mind Mold.

I've also done some freelance video production here and there, and am in the middle of a life-long quest to watch as many non-English movies as I can get my hands on. I have only 3 Kurosawa movies left to go before I move on to Tarkovsky.

Thanks for reaching out. I appreciate it. I hope people will check out the album when it comes out on December 1 on Bandcamp.

Posted by OccultBlackMetal at 5:44 PM