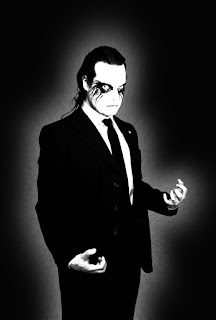 1.For those that have never heard of you before, can you tell us a  little bit about the musical project?
Snakebearer is at the moment one man project/band that draws inspiration and imagery from black metal and mixes it with variety of other metal genres.

2.In July you had released a demo, how would you describe the musical sound that is presented on the recording?
My first idea was to play "regressive metal" in contrast of all the complex song structures and riffs that some of my previous bands had. Well, this isn't that "regressive", but having more of the
traditional verse-chorus-verse -structures of pop/rock songs is a integral part of the concept. Although I use mainly growled or screamed vocals, I try to have melodies and hooks in the songs, but probably in more subtle form than what any kind of pop music would have.

3.You refer to your music as 'blackened pop metal', can you tell us alittle bit more about this term?
I used the term "blackened pop metal" to emphasize the fact that this band doesn't try to be "true" in any black metal sense, and instead of being watered down black metal, it is lighter metal that has been "blackened".


4.What are some of the lyrical topics and subjects you explore with your music?
Lyrical topics range from the Finnish melancholy and depression to ritual perversions. The song that the demo was named after, Throes, has drawn its lyrical inspiration from Finnish folk poetry compilation Kanteletar, even having some lines directly translated from it, but having mostly modern, surreal settings to it. Amorphis used the direct English translations of poems from Kanteletar in their album Elegy, my approach to this is very different, as I reinterpret the poems and their feelings much more freely. Songs that will be recorded later will explore this theme more. And like I mentioned early, third song on the demo is about satanic sex ritual, and the middle one can most easily be
interpreted as a description of a zombie apocalypse.

5.What is the meaning and inspiration behind the name 'Snakebearer'?
Snakebearer is what some call the thirteenth zodiac sign, Ophiuchus, more commonly translated as serpent-bearer. One can contemplate all the symbolism that is associated with snakes and what could be said about a man that can hold and carry one

7.On a worldwide level how has the feedback been to your music by fans of black metal?
On a worldwide level Snakebearer hasn't gathered much attention yet, the forementioned concept of "real" band that plays live would probably help immensely, as new music is published with the help of Internet more than anyone can or cares to follow.

8.Are you also involved with any other bands or musical projects these days?
At the moment I am not involved in other active bands, although I have another solo-project named Archeodecadent, that sporadically explores the sub-genres of black metal from minute long semi-improvised songs to over half hour long ambient black metal piece. I may do session vocals
to a certain band, but that will be seen in the future. And for the blasphemy of it, I last week wrote and recorded a rap verse to feature in a Finnish occult themed hip hop record.

9.Where do you see yourself heading into as a musician in the future?
For the future of my musicianship, I try to constantly learn more. Not with just instruments that I already play, but also learning completely new instruments. Learning to play drums skillfully enough would be probably the main objective. As I record everything at my home studio, homing that craft and gathering better equipment is also quite essential part of my musicianship

10.What are some of the bands or musical styles that have had aninfluence on your music and also what are you listening to nowadays?
I listen too much of everything to list, as it depends completely on what mood I am. When I have spend week practicing and recording metal I often more rather listen to Finnish schlager than anything with distorted guitars. From black metal bands, at least judging by my record collection, Impaled Nazarene and Xasthur are large influences for me.

11.What are some of your non musical interests?
For non musical interests... At the moment I don't think I have time for them as I have two (or four, depending on month) jobs and I am finishing my studies and doing my master's thesis. Which also serves as an explanation for answering to this interview so late. Sorry.

12.Before we wrap up this interview, do you have any final words or thoughts?
This was first interview I have made for this project. Thanks for this possibility.

Posted by OccultBlackMetal at 6:56 PM