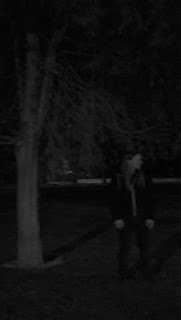 Eneferens is a project that I started in December of 2015. It showcases everything that I love about heavy music, combining elements of black metal, doom, melodic death metal as well as many other influences including shoegaze and post rock. The idea was to to just make beautiful music and do it from the ground up by myself.

2.How would you describe the musical sound that is presented on the recordings?
I feel that (and hope that) the music comes across as very honest - nothing is more than what it needs to be. The songs are very up in down in terms of dynamics as well as levels of heaviness. Contrast is a very important element in the sound. My clean vocals are a drastic change from my harsh vocals just as the clean guitar tones are on the opposite spectrum of the distorted ones. Still though a cohesion brings it all together smoothly and naturally. I toy with dissonance, but overall, the music is very melodic compared to many bands in similar genres because it is the vehicle I know best to really drive the emotive qualities that I set out to present.

3.In less than 2 years you have released 2 full lengths and an ep, do you spend a great amount of time writing and creating music?

I spend as much time as possible sitting with a guitar or in front of the drum kit, so yes absolutely. Life can be very busy and I still feel like I don't make enough time for composing and playing, but I make an effort to everyday because it is a beautiful, almost therapeutic thing for me. It's exciting to come up with some great ideas and form songs, so I do it a lot and thrive from it.

4.What are some of the lyrical topics and subjects you explore with your music?

Lyrics are always the hardest part of the songwriting process for me because I feel like I can tap into feelings and express emotions through music alone much more easily. Lyrics don't seem to come as naturally to me, so I have to dig a little bit. Most themes and topics are about internal struggle, and I often relate things to the beauty and grandeur of nature and its processes. I'm incredibly inspired by nature and I reflect on that in fitting moments. I take a bit of time with the lyrics and do the best I can to make sure that no matter the topic, they are genuine and and an accurate reflection of my mind.

5.What is the meaning and inspiration behind the name 'Eneferens'?

The name 'Eneferens' came to me in a dream actually. It didn't have a significant meaning when I awoke, but the name stuck with me. Later I dissected the word into its greek roots and came up with my own definition which is, "to carry within one's self." This resonated profoundly with me because of the introspective nature of the way I make music and so the name stuck. It's one of those strange things where I feel like it chose me.

6.You record all the music by yourself, are you open to working with other musicians or do you prefer to work solo?

I am absolutely open to collaborative efforts with people - I was in three bands while living in the city I attended college in. Eneferens was the first project where I took everything into my own hands and made no compromises other than my own physical limitations to make the music I wanted to, which turned out to be a fun form of self expression. I really enjoy playing music with other people and hope to do so much more in the future. Outside perspectives and ideas from other great musicians can be very important and refreshing and I definitely recognize that.

7.Originally the musical project was from Montana but now located in Minnesota, what was the cause of the move and also how would you compare the metal scene in both states?

I have a couple of close friends in the Minneapolis area involved in the scene - Jake (Circadian Ritual, Panopticon), Austin (Panopticon) and Tanner (Obsequiae) which helped me choose Minnesota to try something new out. I'm an audio engineer as well as a musician and so I moved to the twin cities in the pursuit of doing more on both facets. The entertainment industry in Montana is much smaller due to the low populations there, but that's not to say by any means that there aren't good music scenes there. Particularly Bozeman, MT has a very supportive scene filled with great bands and musicians which sometimes gets overlooked because it's a bit removed from more densely populated areas. The scene in Minneapolis is great from what I've experienced in my short time here so far, and I'm excited to be a part of it.

8.On the ep you had done a cover of 40 Watt Sun's "Restless", what was the decision behind doing your own version of this song?

All of the music that Patrick Walker has put out has always had a special place in my heart, especially Warning's "Watching From A Distance" record. The track "Restless" has been a favorite of mine since "The Inside Room" came out, and I've played it many times at open mics around Montana, so it seemed like a logical choice especially with how I was feeling around the time of the EP's creation. I hope my version does it justice, it's a beautiful painful song.

9.On a worldwide level how has the feedback been to your music by fans of atmospheric black metal?

Eneferens is by no means a 'purist' approach to the subgenre, and because of that some people have been critical of my use of clean vocals. Clean vocals will definitely always remain a staple in the project's sound without a doubt though. Overall though the feedback has been overwhelmingly positive and encouraging and I'm blown away by that.

It's hard to say. There's so much I would like to do musically, even beyond the confines of metal. I will definitely continue to output as much music as I am able to, and I have a good feeling about the direction I'm going. I'm projecting that touring will become a regular thing for me soon because I love playing and traveling. It would be great to be able to support myself with my music and post-production audio work and I'm doing what I can to make that work eventually. Music is too important to me to not fully immerse myself in it.

My musical tastes are constantly expanding and I listen to and take influence from many genres. Alcest and early Opeth records are big ones for me, but also alternative bands like The National and the Spanish band Neuman have had a profound effect on how I think about and write music. Some great metal I've been listening to include the new Sun of the Sleepless record, Night In Gales' 1997 album "Towards the Twilight", and "Departure" by Sunken. Some non-metal acts I've been enjoying recently are Bohren and Der Club of Gore, Agnes Obel and the new Kauan record.

I enjoy painting immensely as well as experiencing nature through hiking, camping, and fishing. Art and nature in most respects are the heart of my interests and everything stems from there.

Thanks for the interview and thank you to everyone who has listened to and supported Eneferens. Expect a new full length album fairly soon! Cheers.

Posted by OccultBlackMetal at 6:44 PM