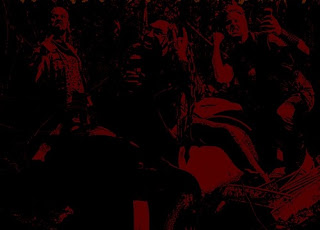 1.For those that have never heard of you before, can you tell us a little bit about the band?
1. The band formed in 2010 in a drunken haze by school buddies Jeppe, Tom, Sebbe and Axel. We loved black metal, hardcore and punk, and wanted to play music that fuse all that shit together. So we did.

2.How would you describe the musical sound that is presented on the recordings?
2. Our newly released album is best left for listeners to comment on, but basically it's a ravaging production by the guys at RealSound Studio, so I would say that it has the same feel as Sodoms late 80s, early 90s stuff and today's Iron Regan (the spin off of Municipal Waste). And there somewhere, with some Satyricon licks and riffs.

3.What are some of the lyrical topics and subjects the band explores with the music?
3. We explore mainly the end of the world as a result of complete and utter human retardation and politics, resulting in the satanic and infernal cataclysm most of us deserve. Satan is also a lyrical theme, because Hail Satan!

4.Originally the band was called 'Skoll', what was the cause of the name change and also the meaning and inspiration behind the name 'Helvetestrom'?
4. We changed from Skoll during productions, because some folk metal Italian guy had a band called that already (Skoll is a wolf in norse mythology by the way, for those of you who are not versed in the old nordic ways). So we changed to the best name to fit the bands music, both soundwise and lyrical, and so it became "Helvetestromb" meaning Hell Tornado. Also, many of our lyrics are in swedish because duh, we're from Sweden, one of the most unholy lands in this world.

5.What are some of the best shows that the band has played so far and also how would you describe your stage performance?
5. We've rocked Satan at Copperfields and Skeppsbar, those gigs where fucking amazing. Mostly thanks to the sound guy who enabled us to hear what the fuck we are playing! Our stage performance is something like 80's bad ass thrasher leather meets even darker 80's first wave black metal. So in short: lots of spikes and leather, black paint because fucking hell we're already white as it is. All in all, we deliver an onslaught of Satanic energy, like to give "the show", so no standing still or being all serious and shit. It's thrash attack party when we perform!

6.Do you have any touring or show plans for the new album?
6. No, we did the release gig this saturday. So now, it's time to reach out to northern Europe and find places and bars to demolish. How the fuck does one get gigs in other countries anyways?

7.On a worldwide level how has the feedback been to your music by fans of black and extreme metal?
7. We've had our music on the american radio, other than that we are most heard in South America, Holland, and even the middle east. Honestly, I don't know how that even works but hey, must be the power of Satan.

8.The new album is coming out on 'WornHoleDeath Records', are you happy with the support that they have given you so far?
8. Yes, Carlo is a cool guy! When that guy snores, the dead rises from their graves! No but seriously, we've gotten very good feedback and backing from them, it's rather we lazy asses who doesn't get shit done!

9.Where do you see the band heading into musically during the future?
9. If Uberfuhrer ov Sadistic Violationz decides, it's gonna be some wierd fucking shit with jazz influences. Luckily, he doesnt get to, and so we will continue to attack all that is holy with blackened thrash and punk tracks. Our musical skills has gone up on our journey, and we hope of course they will continue to do so.

10.What are some of the bands or musical styles that have had an influence on your music and also what are you listening to nowadays?
10. Okay, we heavily endorse the energy and rocknroll in old school black metal such as Bathory and Venom, but also dig d-beat and hardcore punk like Anti Cimex and Discharge. Of course, the norwegian black metal from 90-96 is goddamned indestructibly good, but we don't do that shit ourselves, even though many riffs are influenced by it. Nowadays, we still listen to all the mentioned, because modern metal, I dont know like grindcore, blablablacore, modern rock and numetal or the fuck it's called is fucking shat out of Satans infernal anus. So we listen to Sodom's M-16 or Agent of Steel's Sceptics Apocalypse, because that's fucking brilliant!

11.How would you describe your views on Satanism?
11. We do not believe that Satan is a dark actual being, like a god you can summon with obscure rituals. However, Satan as an ideal and a mental force is right in there with our views on life as a whole. Satan is the freedom we experience when performing our music; the anti-societal, anti-christian critical force, the very symbol of rebellion, dark desires and individual power and human potency. We endorse all satanic symbolism just as much as tight leather pants and latex, and the best thing with Satan, is that he attracts likeminded people to come to bars, where we can all get drunk, talk about band patches and listen to goddamn awesome music with awesome people! That is our take on Satanism.

Posted by OccultBlackMetal at 5:38 PM