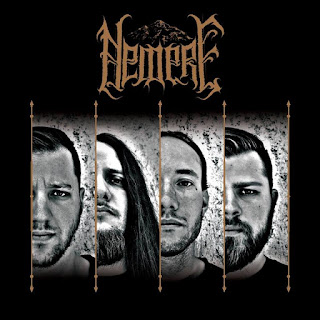 1.For those that have never heard of you before, can you tell us a little bit about the band?
1.We started writing songs back in 2007 but a consistent lineup was only formed in 2009 under the name “Nemere.” The members did not change since then: G.J.-drums, V.T.-guitars, V.Á.-bass, V.ZS.-vocals.

2.Recently you have released an album, how would you describe the musical sound that is presented on the recording and also how does it differ from the stuff you have released in the past?
2.Our earlier releases were more raw and aggressive. The new album is a little cleaner regarding both the sounding and riffs, while staying loyal to its raw roots.

3.While there was 2 demos in 2009 and 2010 you waited until 2017 to release your first full length, can you tell us a little bit more about the 7 year gap?
3.We had several shows from 2010 to 2012 then recorded Vérmező in the summer of 2012, but as our guitarist had to move to another country it has not been released at that time. Also, we stopped functioning like a proper band, and because of that the whole project was shelved for later times. And those “later times” are now.

4.Your lyrics cover Anti Christian, Nature and Ancient Hungarian Life, can you tell us a little bit more about your interest in these topics?
4. The rather aggressive anti christianity is more typical for our demos. Our later lyrics features various images of nature, and since we find the ancient Hungarian way of living really inspiring (wandering free nomads), we included those elements as well. We also wanted to take an approach on expressing life and death through our own perspective.

5.What is the meaning and inspiration behind the name 'Nemere'?
5.It is an ancient Hungarian forename. There is also a mountain range that shares the same name in Transylvania, and they call a powerful wind which blows from there Nemere as well.

6.What are some of the best shows that the band has played over the years and also how would you describe your stage performance?
6.We don't really have a "best show", all of them were great experience for us. I would call our early performances kind of raw, we used to wear corpse paint and studs/nails, but we left those times behind. However, we do our best to keep certain elements, like the intensive and energetic stage performance while we improve the stage settings.

7.Do you have any touring or show plans for the new album?
7. We are planning several shows, but there is no fixed date yet.

8.On a worldwide level how has the feedback been to your music by fans of black metal?
8.We didn't get many responses due to the fresh appearance.

9.Where do you see the band heading into musically during the future?
9.We will just play our own music whatever changes it may go through in the future. We do not care about the style, the only important thing for us is that we are able to express ourselves through it.

10.What are some of the bands or musical styles that have had an influence on your music and also what are you listening to nowadays?
10. All of us had different influences both in music and in life so we don't really want to say any specific bands. Nowadays everyone is listening to different kinds of music as well, not only metal. We're trying to be open-minded about it.

11.What are some of your non musical interests?
11.We are burning churches, drinking goat blood, sacrificing virgins... Just kidding, but we think that the question is irrelevant to the band itself. We are all just regular people with regular interests besides music.

12.Before we wrap up this interview, do you have any final words or thoughts?
12.Thank you for the opportunity! Stay tuned for more info about us soon!

Posted by OccultBlackMetal at 8:00 PM