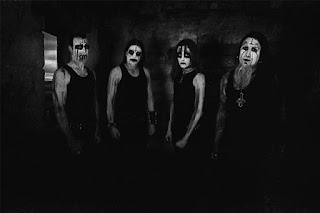 There is always something brewing behind the scenes! Currently we are preparing for a group
of both local and away performances as well as writing for our second full length album which is already well on its way and is sounding (in my opinion) much more refined than the last.

2.So far you have released a full length and live album, how would you describe the musical sound that is presented on the recordings? We play relentless, brutal black metal. There are of course for anyone who has heard us, undeniable death metal influences but not in the traditional blackened death metal sense. We take the brutality and speed of death metal which is present throughout our whole repertoire, but we keep the guitars shrill and in your face with a very traditional black metal atmosphere. We have in the past been referred to as black metal with grind drumming which is not
far from the truth in some respect, but if I had to give us a particular term it would be, as stated before, relentless, brutal black metal.

3.Your lyrics cover Satanism and Anti Christian themes, can you tell us a little bit more about your interest in the dark arts? We are in no way Devil Worshippers or anything like that, but religion as a whole is such a macabre subject yet people don’t realize it. The history of most modern religions is war torn and vicious, even though many don’t wish to discuss it. We are all teaming with morbid fascination and an obsession with all things extreme, and by combining that with an interest in the darker parts of religion we can create something extremely confronting. Although we may not literally believe everything we sing word for word, there is always a certain honesty in the overall message of our songs, if you know what to look for. Of course that hardly happens, the average person thinks that our music and themes are sickening and wants nothing to do with any of it, but
ah well, shit happens.

4.What is the meaning and inspiration behind the name 'Christ Dismembered'? This is not a story we tell too often but the original band name was Christ Ablaze, and that worked well for a while but people began getting the wrong impression. A few folks we briefly knew thought that by Christ Ablaze we meant “The Light of Jesus” which, believe it or not, was not what we were trying to portray! So, we needed something similar but more straight to the point. Our drummer instantly suggested “Christ  Dismembered” in a somewhat tongue-in-cheek sense, and however blunt it was it grew on us and within a few weeks we adopted it as our official name. Some have stated that they think it is a little try hard or over the top, but it is what it is now, its brutal its memorable and with a name like that there’s no if, and's or buts to what you’re gonna hear!

5.What are some of the best shows that the band has played so far and also how would you describe your stage performance? Recently we have opened for Angelcorpse (USA) and Grave Miasma (UK) which were both incredibly memorable nights. Of course with Angelcorpse’s status that show was naturally going to be a night to remember, but the Grave Miasma show was held at one of Adelaide’s most prolific heavy music venues which we had all seen some of the worlds best extreme metal acts, not to mention some of our favorite bands perform at, so that was a great experience. Earlier this year we also headlined Adelaide’s inaugural ‘Blastfest’ which was a brilliant night and I’d say one
of our most statement making gigs to date. Other than that we have played many memorable small scale intimate/local shows which are always great to look back on. Our live show is non stop and chaotic. We fit as much music as we can into our time slot and always try to match it well with dim lighting and smoke, plus usual black metal stage props like barbed wire and animal heads. We feel that having a striking onstage presence is just as important as the live sound itself.

6.Do you have any touring or show plans for the future? We will be supporting Funeral Moon on the Adelaide and Mount Gambier legs of their Utter Live Carnage 2017 national tour which we are looking forward to. As for headlining tours, there are many plans in the pipeline which we hope to set in stone within the next few months, but there is nothing announced just yet.

7.Currently you are unsigned, are you looking for a label or have received any interest? We have received some interest from several labels, but we have had an overwhelmingly positive response
to our debut album so far which was released 100% independently. So, we are in no rush to be signed just for the sake of it as the DIY method has worked perfectly for us so far, but we have discussed the idea for when it comes time to release our sophomore album, so who knows what the future will hold.

8.On a worldwide level how has the feedback been to your music by fans of black metal? Very well actually, metal is the perfect genre in that respect. If you’re an aspiring pop star you would wanna be in the USA, if you’re playing Punk Rock you would wanna be in the USA or the UK, but Metal sells a little bit everywhere, so regardless of how extreme our sound may be we have never felt isolated in that respect. It was only a week or two ago I posted out several merch orders to Spain, and that says it all when an upcoming black metal band from Rural Australia can attract fans like that. Australia does have a fantastic metal scene, and in regards to musical quality I personally think its one of the worlds finest, but its so spread out and such a pain to travel 5-6 hours just to get a new crowd. So fingers crossed we can take the band overseas sometime in the near future.

9.What is going on with some of the other bands or musical project these days that some of the band members are a part of? Well I have a solo black metal/dungeon synth project called Frostveil which I recently released the debut EP for which has been greeted with an excellent response so far and even more recently a single which is also doing quite well. It is still black metal but more of a Woods of Desolation/Drowning the Light vibe rather than the Dark Funeral/1349 vibe CDM aims for. Our other guitarist The Sadist also plays in a crusty grindcore/punk/powerviolence band called Wounded Pig who have released an extremely powerful full length album called A Permanent Mark and a split with Australian Doom band She Beast. They describe their sound as ‘Blast Beat Punk’ and put on a very chaotic live show, so if you’re into that kinda stuff make sure to check them out!

10.Where do you see the band heading into musically during the future? With our second album we will definitely be sticking with a very similar vibe to the first. However we are putting much more time and effort into the songwriting aspect, and being a four piece now we have two more brains to bring into the mix. We do of course really enjoy our first album and are quite proud of it, but when listening to our new material in comparison, we can definitely sense a more mature sound than before.

11.What are some of the bands or musical styles that have had an influence on your music and also what are you listening to nowadays? Christ Dismembered has been influenced by a lot of well known bands such as Dark Funeral, Belphegor, 1349, Naglfar, Gorgoroth, etc, but we are trying to
let other bands influence us less and less and that has definitely helped us craft a signature sound which is prevalent in our live performances and will be much more noticeable in the second album than the first. When it comes to black metal I listen to a lot of Australian, Finnish and French bands. My favorites include Striborg, Drowning the Light, Woods of Desolation, Satanic Warmaster and the Les Legions Noires. Our tastes are not exclusive though, we all listen to a variety of genres. Some of my non black metal favorites include Joy Division, Rose Tattoo, GG Allin and Silverstein. I think it’s very important as a musician to appreciate a wide range of genres, although black metal will always be what I am most passionate about.

12.Before we wrap up this interview do you have any final words or thoughts? Massive hails to everyone who has supported us so far, keep doing what you are doing for not only us but for up and coming independent bands worldwide, it’s anything but easy for original musicians to make it these
days but it pays off when people worldwide begin to appreciate something you pour your all into. Expect more from Christ Dismembered in the near future, NEVER STOP THE MADNESS!!

Posted by OccultBlackMetal at 8:30 PM