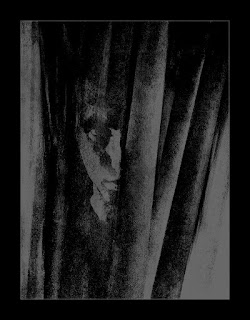 1.For those that have never heard of you before, can you tell us a little bit about the musical project?
1. Erancnoir was born to picture the autumnal or/and hibernal landscapes and metaphors found within them.

2.So far you have released 3 albums with this musical project, how have all of the albums differed from each other so far?
2. I wrote those albums in a period of 3 years. So, a slight change in sound with each album was inevitable. Production-wise, the quality of the first album was intentional, as I wanted to capture the real feel of winter, and thus recorded most parts of the music in mountains of northern Iran.

3.What are some of the lyrical topics and subjects you have explored with your music so far?
3. Lyrics are mostly works of haiku and wander around themes of autumn and winter, while also using metaphors of life in between the words.

4.You are also involved with some other bands and musical projects, what is it that you bring into the musical of 'Erancnoir' that you are not able to do with your other groups?
4. Erancnoir is more personal and darker than the other projects of mine. Also, it differs in the theme and sounds.

5.What is the meaning and inspiration behind the name 'Erancnoir'?
5. Erancnoir is the name of the entity representing my inner thoughts and emotions. It's the other side of me. It has no exact meaning. It was just a brain wave.

6.Can you tell us a little bit more about the artwork that is presented on the new album cover?
6. The artwork on the self-titled album represents pieces of a painting by famous Iranian poet and painter, Sohrab Sepehri, who has inspired my view on the world a lot.

7.In 2018 alone you had at least released 9 albums all together with your musical projects, do you spend a great  amount of time writing and creating music?
7. I don't spend that much time on writing and creating, although I always have raw ideas in mind. I rather like to do things fast and (usually) in a single take. The reason for the great number of releases was that some of the works were written before, or even produced, yet not published until that time.

8.You have done both solo projects and full line ups, how would you compare the two?
8. In Iran, full line-ups don't work for someone who has a thirst for creating and publishing new music. Also, it's costly and sometimes even dangerous. Besides, working solo gives me the space I need to create what pleases my ears and soul.

9.Can you tell us a little bit more about 'Ardawahist Kollective'?
9. Ardawahisht Kollective is the collection of all projects I'm involved in. I thought that a platform to promote all my musical endeavors was more than needed. So I created Ardawahisht in order to gather my sounds in a 'circle' of sorts and give listeners a taste of full-Iranian underground extreme music.

10.On a worldwide level how has the reaction been to your music by fans of black metal?
10. It’s been ok. I mean, I don't have the same amount of advertisement and promotion of my works like other projects in the genre. And me being Iranian, sometimes worsens the situation, because of the worldwide view on Iran. But there have always been people who have supported me from the beginning. And that's joyous for me: have real listeners and those who enjoy this kind of sound.

11.What is going on with some of the other bands or musical projects these days that you are a part of?
11. They all await some fresh ideas to be put in new music! We'll see which one comes first.

12.Where do you see yourself heading into as a musician in the future?
12. I have no clear view of the future. What I plan to do, is to show the listeners of this genre around the world a fresh view on Iranian extreme (and atmospheric) metal music. On a personal level, I continue to express myself in new and different sounds.

13.What are some of the bands or musical styles that have had an influence on your music and also what are you listening to nowadays?
13. There are a lot of artists that had a spark of influence on me; but I am mostly inspired by works of atmospheric metal music, among them Lustre, Burzum, Alcest, etc. to name a few.

I don't listen to metal music that much anymore. I rather prefer electronic and ambient sounds these days.

14.Before we wrap up this interview, do you have any final words or thoughts?
14. Nothing remarkable. Thank you for the interview. Eternal hails!

Posted by OccultBlackMetal at 5:39 PM