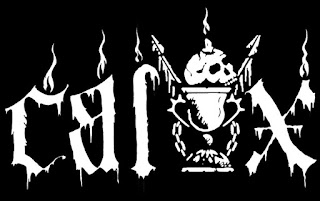 Calyx was born on 2013 by Fantoni and Humungus, two teenagers obsessed by Bathory albums. Our lifes were all about hanging out through ruins and catacombs on Fridays with our friends, with high doses of beer. That was our main inspiration. We wanted to create rusty and putrid music to channel our visions. Some years later Huarte and SD came into the band, and with their twisted minds they helped to define Calyx’s decrepit style.

2.You have your first full length coming out in May, musically how does it differ from your previous demos?

Musically it has been a huge progression since our beginnings, on a technical, songwriting and lyrical levels. We wanted to make faster songs but without loosing those slow and tormenting interludes. The aura of Calyx is still decrepit and haunting.

3.Some of your lyrics deal with the Middle Ages and Native Legends of the Iberian Peninsula, can you tell us a little bit more about your interest in those topics?

Is hard to explain in a rational way. We want to express an atavic feeling that is deep within us and this music is the only way to do it. Ruins and legendary places of Iberian Peninsula (specially Aragon) are the essence of Calyx. We always use our imagination, instead of writing history lessons, because we want to create our own universe. Lyrics have a poetic atmosphere inspired by authors like G.A Becquer and Garcilaso de la Vega, among others.

4.What are some of the other lyrical topics and subjects you have explored so far with the music?

I always try to dive inside the darkest vortex of my soul. Sometimes i let the passion of the moment drive me and others i take inspiration from dreams or meditations about the true evil of the ineligible world. I dont aim to foment evilness, but to describe it just as i perceive it. Sometimes is a really painful experience which can drive me to a state of existential fear, but is necessary.

5.What is the meaning and inspiration behind the name 'Calyx'?

Calyx means chalice in latin language. The symbolism of the chalice has an esoteric nature which is linked to our inner search. Christians use it for their eucharisty, but the magic properties of this symbol has an older and mysterious origin. Is a paradox between light and darkness, equilibrium, metaphysical knowledge, cosmic order... for me is the symbol for the spiritual warrior’s goal.

It was painted by our good friend Gaueko, composer in Aehrebelsethe and guitars for the death metal band Sepulchral. The album cover is full of symbolism of many kinds, such as paganism or the concept of the album’s name. With ‘’Vientos Archaicos’’ we refer to our passion with the ancient world, but also to a nostalgic feeling for the old times of black metal. This said, i prefer everyone have their our conclusions and use their imagination.

We have played three gigs so far and all of them were a great experience. I will always remember our first gig in Llodio by the iniciatic atmosphere we felt. In our gigs, old school is our thing: Spikes, leather and chains. You will never see us wearing bed sheets or that kind of shit, we prefer to terrorize the audience with our ugly faces (laughs).

We have some gigs in our area on June, but we would like to play outside Spain. We are open to any offer to play anywhere in the world.

We aren’t a very well-known band so i dont know the reactions of the people beyond our closest contacts.

10.Are any of the band members currently involved with any other bands or musical projects these days?

SD: Im involved within OMINOUS TORMENT and DESECRATION RITES, both personal Black Metal projects of mine, more in the negative side of the genre. I play guitar in SLAUGHTERCULT too, a Black/Thrash band where we are working in our first demo.

These days we are composing new songs for the next album. We wish to keep creating and going further inside our inner being to crystallize our visions through music.

The bands that had most impact on us are Bathory, Celtic Frost, Tormentor, early Satyricon, Darkthrone, Desaster, Burzum, etc. Of course we are huge maniacs of traditional Heavy Metal... Judas Priest, Iron Maiden, Motorhead, Exciter, and all that musical bagaje of every young metalhead. We listen to all kinds of music beyond metal too

13.How would you describe your views on Paganism and Occultism?

Personally i conceive paganism as a way of communication with the invisible side of nature. Occultism pretends to achieve this conexión through a transgression which breaks with the parameters established by matter, trying to transcend them in order to get spiritual empowering.

Concerning neopaganism and its diverse ways, i think it is the product of a feeling of inner emptiness of the modern man who tries to fill it with something that official religions cannot give. The problem is that most times is only about the superficial elements of paganism without reaching its deep essence. So is important to distinguish real paganism from modern and consumist spiritual products, because the last ones arent a good channeling for the inner confusion we feel. The way is to actualize and rebuild the transcendentalist cosmovisions of ancient traditions, and not to be conform by mere futile matters painted with aesthetics of the past.

Thanks a lot for this interview and greetings to all those apostates of the modern world. 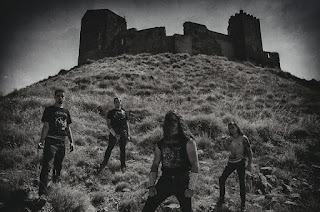 Posted by OccultBlackMetal at 3:21 PM