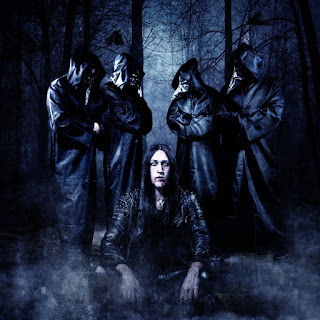 1.For those that have never heard of you before, can you tell us a little bit about the musical project? Boris: the project came in my mind during the early 2018 when i was so tired to play with people without my same vision and passion in music.I think it was march when all started,and from the beginning i wanted to express my vision not only with music but also with the band's look,wich is important thing to me.

2.You have your first album coming out during the end of May, can you tell us a little bit more about the musical style you went for on the recording? Boris: from the beginning my idea was to combine my love for black metal and 80' horror movies and recreate(especially in live situations) that feeling.there's a song in the album called "creature of the night" that is a perfect combination between black metal and some 80' hair metal.What i wanted was to create an album that's still black metal but catchy and recognizable at first listening too.the songs are catchy but still brutal.

3.Your lyrics cover a lot of horror topics, can you tell us a little bit more about your interest
in this subject? Boris: i have this passion for horror since when i was a child.I was always attracted by horror movies and his imaginary.When i was a child i hid myself from my parents just to see horror movies in the night and then, of course,i didnt slept all night haha.At the age 14 i started to buy a magazine called "Horror mania" which had also attached a dvd and was always a good movie like Brain dead,Bad taste,The thing etc..I remember that my mother was so scared that she wanted to take me to a psychologist.Over the years things were not better so i covered myself with horror tattoos and my love for this genre is more alive than ever.

4.I know that the band name comes from Slavic Mythology, can you tell us a little bit more about your interest in Slavic Paganism? Boris: to be honest,i don't know so much about slavic paganism and i didn't read so much about this.I was searching a proper name for the band and when i found Tryglav i thought that was perfect for the band..that's all.

5.Can you tell us a little bit more about the artwork that is presented on the new album cover? Boris: The artwork was done by a hungarian artist called David Busai at Mordiggian art. i saw his work on instagram and he sold these fantastic images created by him and when i saw this one i was like..shit,this pic is perfect for the
album,it must be mine!David did also the editing of band photos and the all cd booklet.My idea for the cover was to have something dark,with cemetery and other horror stuff and this was exactly what i had in mind.I'm totally happy with the cover,in my opinion is awesome and reminds me Abigail from King Diamond and The Somberlain from Dissection.

6.On the album you record everything by yourself but use different musicians for live shows, are you open to working with a full band in the studio on future releases? Boris: absolutely not! i'm done with this shit,i can't work with other people..it's just not for me.I'll do all alone like this first record.If i need some solos or something like that i will ask "Plague Doctor I" to do something(like the 2 solos on this album)but that's all.

7.What are some of the best shows that the band has played so far and also how would you describe your stage performance? Boris:unfortunately the band has never play live yet.i'm still searching for live members but it's a matter of months.be sure that the live shows will be something in line with the band's image..will be an horror experience but i'm still working on that.

8.Do you have any touring or show plans once the new album is released? Boris:not yet because like i said i don't have a live members yet but i think that the band will be operative before the
album release.

9.On a worldwide level how has the reaction been to your music by fans of black metal? Boris:Reaction was awesome..black metal fans love the song and what amazed me is that so many people who don't listened black metal love  the song.that's what i wanted with this album and it seems that i did it.

10.Where do you see yourself heading into as a musician during the future? Boris:well my dream is to quit my job and touring the world but i guess it's a dream for all musicians so..we'll see!

11.What are some of the bands or musical styles that have had an influence on your music and also what are you listening to nowadays? Boris: i'm influenced by all thing i listen.there's so many black metal bands that influenced me so i won't make a list but also there's a lot of 80' metal bands that influenced me with their music and imaginary too.i'm mostly influenced by black metal and 80' metal. nowadays i listen all the same shit i listen since when i was 16..black,death,thrash,heavy etc..except modern metal,core and djent shit.Recently i'm listening the new Valkyrja's "Throne blaze"..awesome album!

12.Before we wrap up this interview, do you have any final words or thoughts? Boris: i would to thank you for the interview and for the readers..go on youtube and check the first Tryglav's single
"Night of the whispering souls"..thank you!

Posted by OccultBlackMetal at 5:55 PM