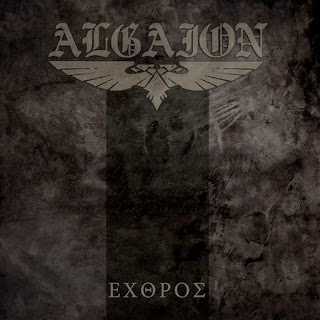 Algaion are a band  from Sweden that has a history dating back to the 90's and disappeared from the scene for a long time, and i would describe their music as being raw and melodic black metal in the Greek vein and this is a review of their 2010 album "Exthros" which was released by Pulverised Records.

Drums are mostly fast with a lot of blast beats and some mid paced drumming, while the bass playing has a very dark tone and follows the riffs that are coming out of the guitars with a great amount of power being used at times, as for the keyboards they are only used in briefly and they bring a tragic sound to the music.

Vocals are all high pitched black metal screams, while the lyrics cover darkness, despair, sorrow, occultism and Satanism, as for the production it has a very dark and professional sound that gives all of the instruments a strong and heavy sound.

In my opinion this is a good comeback album from Algaion and if you where a fan of their previous albums you will not be disappointed. RECOMMENDED TRACKS INCLUDE "The Time Is Nigh" "We Are The Enemy" "Nature Our Slave" "Sign Of Evil Existence/Era Of Satan Rising". RECOMMENDED BUY.

http://www.myspace.com/algaionofficial
Posted by OccultBlackMetal at 1:23 PM