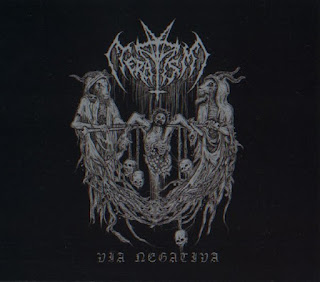 Teratism are a band from Minnesota that plays a raw and brutal form of satanic/occultic/black metal and this is a review of their 2010 album "Via Negativa" which was released by Negativity Records.

Drums range from mid paced to fast with a lot of brutal blast beats and the occasional slow drumming, while the bass playing has a very powerful tone that brings a lot of darkness to the music.

Rhythm guitars are mostly mid paced to fast raw war/black metal riffs with some occasional slow riffing and there are little to no guitar solos or leads present on this recording.

Vocals are all high pitched black metal screams, while the lyrics cover Satanism, Demonology with some references to the Sumerian demon Pazuzu, and Anti-Christianity, as for the production it has a very dark and raw feel to it while style capturing all of the instrument sounds and making them sound very brutal and primitive.

In my opinion Teratism are a very good primitive satanic black/war metal band that should appeal to all fans of this genre and they also put on a good live show which I have seen many of times. RECOMMENDED TRACKS INCLUDE "MY Wintery Embrace" "Necrofuge" "A Trillion Slain" and "I Am The Darkness". RECOMMENDED BUY.

Posted by OccultBlackMetal at 4:56 PM