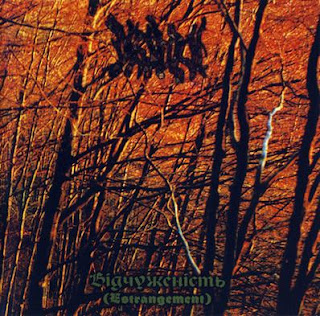 Drudkh are a band from Ukraine that has had their music reviewed in this zine before that plays a raw form of pagan black metal and this is a review of their 2007 album "Estrangement" which was originally released in 2007 and re-issued by Season Of Mist Underground Activists during the year of 2010.

Drums range from slow to mid paced drumming with some fast playing and brutal blast beats, while the synths are used as only a background effect and they do not overpower the music, as for the bass playing it has a very heavy and distorted tone that is very powerful and easy to hear on this recording.

Rhythm guitars are a mixture of slow, mid paced and raw black metal riffs, while the lead guitars are very melodic and distorted sounding black metal guitar solos with a primitive folk edge to it, as for the acoustic guitars they being a pagan folk edge to the music with a good sense of melody.

Vocals are deep black metal screams, while the lyrics are written in Ukrainian and are about Ukrainian Paganism, Nationalism, and Pride, as for the production it has a very powerful and raw edge and you can hear all of the musical instruments that are present on this recording.

In my opinion this is another good album from Drudkh and fans of this band would not be disappointed. RECOMMENDED TRACKS INCLUDE "Solitary Endless Path" and "Only The Wind Remembers My Name". RECOMMENDED BUY.

Posted by OccultBlackMetal at 9:30 PM