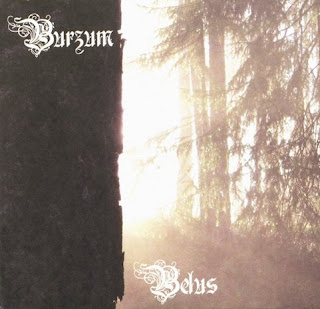 Burzum are a 1 man band from Norway that needs no introduction at all and this is a review of their comeback album "Belus" which was released by Byelbog Productions.

Drums range from slow, mid paced to occasional fast drumming with only a small amount of some blast beats, while the bass playing has a dark tone which follows the riffs that are coming out of the guitars and at times they sound very powerful.

Rhythm guitars alternate between slow, mid paced to some occasional fast raw black metal guitar riffs with a focus on ambiance and distortion and on a couple of song's there is a thrash feeling to the music, while the lead guitars sound very primal in the guitar solos with some melodies being used at times with a dark sounding distortion.

Vocals are mostly high pitched black metal screams, some deep growls that have nothing to do with death metal with some occasional spoken word passages and clean singing, while the lyrics are written in Norwegian and focus on Belus, the Germanic God in his many different forms and relations to other pantheons, as for the production which was recorded at Greighallen Studios in Norway, it is very dark sounding which is perfect for the primal energy coming out of the music.

In my opinion this is a great comeback album from Burzum, which is a lot different than the last few albums since there is no keyboards or synths, with this album you still have the "Filosofem" vibe but with more rawness and less of an ambient sound, if you are a fan of Burzum you will not be disappointed. RECOMMENDED TRACKS INCLUDE "Belus Doed" "Sverddans" and "Morgenroede". RECOMMENDED BUY.

Posted by OccultBlackMetal at 5:02 PM