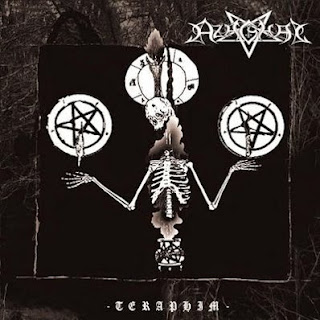 Azaghal are a black metal band from Finland that has also been interviewed by this zine and they play a style that they themselves consider Black Terror Metal and this is a review of their 2009 album "Teraphim" which was released by Moribund Records.

Drums are a mixture of slow, mid paced to fast with a lot of brutal blast beats, while the bass playing has a very dark tone that sounds very powerful and morbid sounding at times, as for the synths when they are utilized they bring in Gregorian chants into the music mixed in with some more dark and haunting elements.

Rhythm guitars have a modern black metal sound with some heavy and heavy riffs that also have some death metal and thrash influences in the mid paced parts mixed with a small amount of melody and some slow riffing, while the lead guitars utilize a lot of dark sounding exotic scales and melodies in the guitar solos as well as some classic metal influences.

Vocals are mostly high pitched black metal screams mixed in with some deep growls and some clean singing as well as some spoken word passages, while the lyrics cover Satanism, Luciferian, Caballa, Alchemy, Necromancy and Armageddon, as for the production on this recording which was recorded at Cursed Studio, Bi-Audio and Niflhel Studio during the summer of 2009 sounds very professional and you can hear all of the musical instruments that are present on this album.

In my opinion this is another good album from Azaghal and while it is not as raw and primal as their early material, you can still tell that they have grown a lot as musicians over the years and if your are a fan of their last few albums you will still enjoy this one as well. RECOMMENDED TRACKS INCLUDE "XI Omega" "Teraphim-Puhdistva Tuli" "Pimeydan Kutsu" and "Kyy". RECOMMENDED BUY.